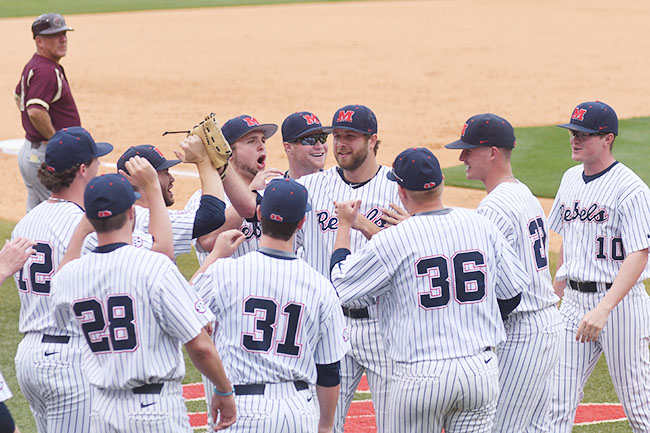 Ole Miss' Sean Johnson (33) is congratulated by teammates after being taken out of the game against Louisiana-Monroe at Oxford-University Stadium in Oxford, Miss. on Wednesday, May 3, 2017. Johnson carried a no-hitter into the seventh inning before being lifted after giving up a single. (Bruce Newman)

Ole Miss followed a win Tuesday with another against Louisiana-Monroe on Wednesday.

That’s all that mattered for the Rebels.

It wasn’t as comfortable as the 21-7 victory less than 24 hours earlier, but Ole Miss used six one-hit innings from Sean Johnson and some late offense to close out the midweek series with a 5-3 win at Swayze Field. Despite the wins, the Rebels’ RPI dropped to No. 35 after playing a ULM team that began the week with an RPI of 234.

Now Ole Miss (29-17) gets the chance to improve it and further strengthen its postseason resume with a series at No. 7 Florida, which is sixth in the latest RPI rankings, starting Friday at 5:30 p.m. Winners of seven of their last 10 games, the Rebels are pegged as a 3 seed by Baseball America and D1Baseball.com in the outlets’ latest NCAA Tournament projections released Wednesday.

“Today and yesterday was a big confidence booster,” said third baseman Colby Bortles, who broke a scoreless tie with a two-run homer in the bottom of the sixth. “I think we have all the confidence in the world in our team and the success we’re having.”

Freshman Cole Zabowski, who went 2-for-3, contributed to Ole Miss’ four-run sixth with an RBI single while Nick Fortes hit his third homer in two games — a solo shot in the seventh — to make it 5-2. Bryan Seamster drove in a run while Will Golsan also had two hits for the Rebels, who racked up 28 hits in the series.

It all backed Johnson (1-0), who turned in one of the better efforts of his career. The senior right-hander, who had Tommy John surgery in 2015 and has been occasionally used as a reliever since coming back from a hand injury earlier this season, had allowed four earned runs in just 7 2/3 innings this season but tied a career-long outing in just his second start of the season, taking a no-hitter into the seventh before Spencer Hemphill’s leadoff single ended his day after 83 pitches. He walked three and recorded a career-high six strikeouts.

“It’s easy to sleep on a team when you beat them so bad the night before,” Johnson said. “We get through so many innings and you start seeing they’re putting up some zeros, you’ve just got to lock in and say, ‘I can’t let them score. We’ve got to score first.’ … I don’t really see myself as a starter anymore with the way my arm comes back after throwing so many pitches in one outing, but it just felt good to be out there to be honest.”

Said Ole Miss coach Mike Bianco, “He’s been through a lot. He’s a great, great competitor and a great teammate, and it showed today. He deserved that today.”

Johnson was charged with one run after Hemphill came around to score on Tyler Cox’s homer off Brady Feigl later in the inning to make it 4-2. ULM (12-34) used three straights hits against Will Ethridge to load the bases in the eighth and got a sac fly from Hemphill to again get within two runs, but Ethridge induced a groundout from Chad Bell to prevent further damage.

Dallas Woolfolk got a double-play ball to erase a leadoff walk in the ninth and retired Nathan Reynolds for his 10th save.

“Yeah, we all want it to be 1-2-3 and we want it to be easy, and there’s a lot of games where it’s pretty clean,” Bianco said of the bullpen. “But there’s times where you’re challenged. Certainly Ethridge was challenged and Dallas, and the good news is they can usually handle the blows of the other team and the adversity sometimes that the game gives you.”

Sophomore center fielder Ryan Olenek was removed from the game after the fifth as a precaution after colliding with shortstop Grae Kessinger on a miscommunication early in the game. Bianco said Olenek may have a concussion but will undergo further evaluation.