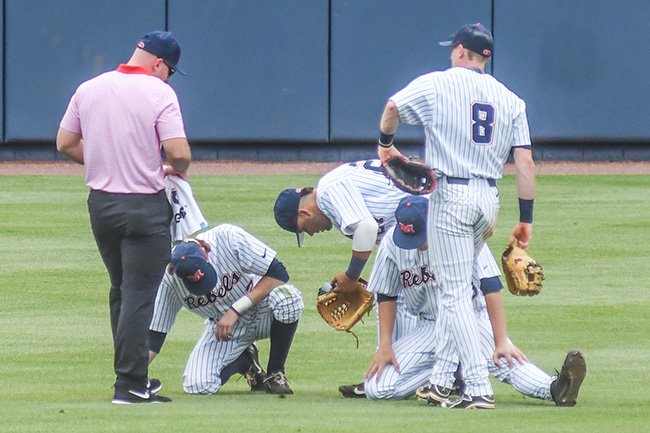 Ole Miss’ Ryan Olenek is checked on after colliding with teammate Grae Kessinger against Louisiana-Monroe at Oxford-University Stadium in Oxford, Miss. on Wednesday, May 3, 2017.

Ole Miss center fielder Ryan Olenek will continue to go through concussion protocol this weekend and won’t play in the Rebels’ series at No. 7 Florida.

Olenek collided with shortstop Grae Kessinger while trying to catch a fly ball during Ole Miss’ 5-3 win over Louisiana-Monroe on Wednesday and was removed from the game after the fifth inning. Olenek did not make trip to Gainesville, an Ole Miss spokesperson said.

Olenek, who’s started all 45 games for the Rebels, is hitting .261 with a team-best 15 doubles and 21 RBIs. Junior Kyle Watson finished Wednesday’s game for Olenek and is hitting .175 in 41 games, including 16 starts.

Friday’s series opener will start at 5:30 p.m. as will Saturday’s game. First pitch for Sunday’s finale is set for 1 p.m. on the SEC Network.