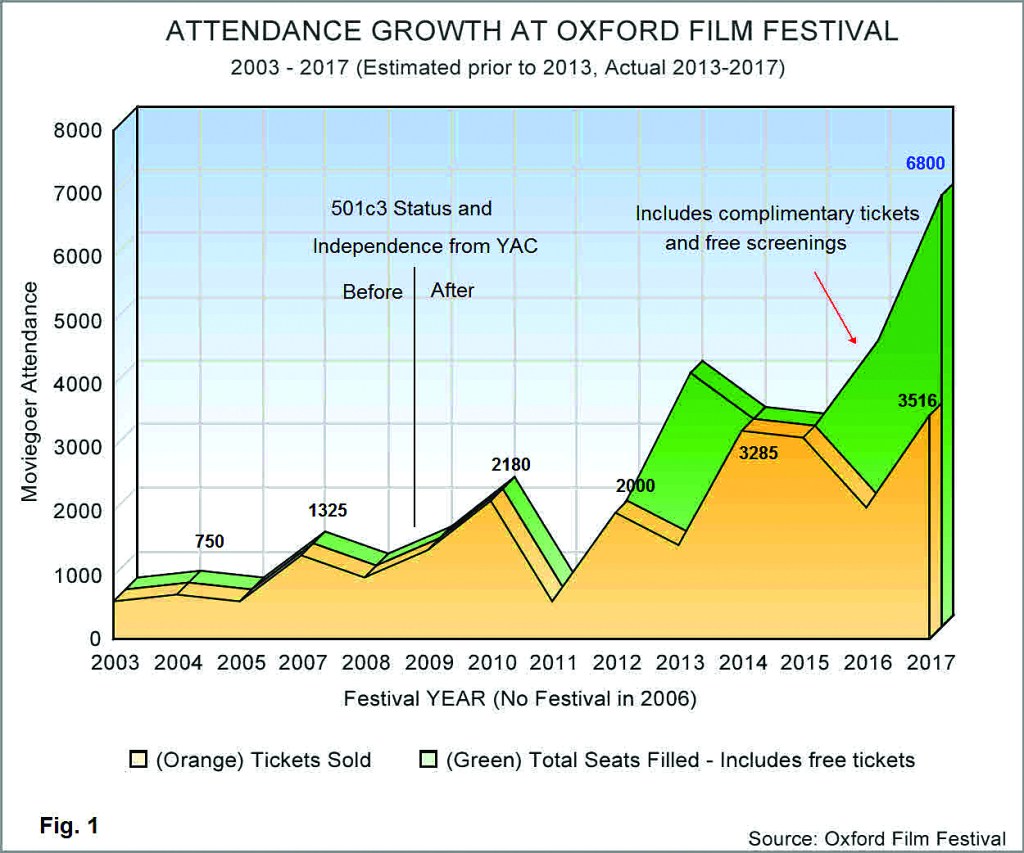 The Oxford Film Festival has been a high-profile annual event in Oxford since its inception, and it has also been a growing contributor to the Oxford and Lafayette County economy. But with anticipated new federal and state budget cuts in spending on arts and humanities lurking in the wings for 2018 and 2019, Melanie Addington, Executive Director of the Oxford Film Festival, is concerned she may lose as much as $41,000, or 23 percent of her operating budget, in funding from government and private sources for coming year’s festivals. That could mean a smaller festival and reduced economic benefits to Oxford and Lafayette County.

The film festival receives funding principally from three sources. The Mississippi Development Authority, which funds the Mississippi Film Office, and the Mississippi Arts Commission are both state government programs.  The third funding source is Mississippi Humanities Council, which is a private organization that receives its funding from a grant from the federal National Endowment for the Humanities.

Addington knows that $41,000 in cuts is a worst case scenario, but while waiting for some real, concrete numbers she is making plans to deal with reduced funding. Addington said she will have to wait until July to find out what funding she will get from the state for the next year.

To deal with anticipated cuts “We are cutting back the number of films, and therefore number of filmmakers, we pay to bring here,” Addington said. “We are also trying to find ways to be thrifty and spend less in all areas. We are reaching out earlier to potential sponsors to try and find funds as well as writing more grants to foundations. Our goal is to find the money somewhere so that we do not have to make many changes.”

Addington said the festival paid for multiple-night hotel rooms for more than 100 filmmakers and jurors for the 2017 festival.

The festival has a 14-year history and has gained in popularity and prestige from within and outside the Oxford Community. This past year’s festival was covered in the on-line Los Angeles arts and entertainment magazine The Los Angeleno. Many of the filmmakers submitting films for the Oxford Film Festival come from the Los Angeles independent film community.

One such filmmaker is Juri Koll, who has had two films in the Oxford festival. “Texas Heart” was screened in 2016, and his latest “Kudzu Zombies” was showcased this year. He said “Kudzu Zombies” was so popular with audiences that it was screened three times, instead of the original one. He plans on making the third film next year in Mississippi for the Oxford festival.

Koll said he likes to come to the Oxford “because it is one of the most prestigious film festivals in the South. The festival is fantastic, it is super well run, the volunteers are incredible, and the hospitality — you can’t beat.”

Eliza Hajek, a representative of Screen Actors Guild – Indie (SAG-AFTRA), attended the 2017 festival and said “it is the best film festival in Mississippi.”

A number of films screened at Oxford have gone on to be nominated for Oscars, including this year’s “I Am Not Your Negro” and “God of Love” from 2011, which won an Oscar. The festival has also attracted several well-known personalities in the film industry, including James Franco and Giancarlo Esposito (known for “Breaking Bad”), both of which had film entries. Other notable actors attending the festival include Danny Glover, Jason Ritter and Morgan Freeman, according to Addington.

The festival experienced slow but steady growth during its early years, breaking the 1,000 attendance mark in 2007. By 2008 the festival obtained 501c3 tax status as a non-profit corporation and became independent from the Yoknapatawpha Arts Council. Accurate attendance tracking began in 2013, and at that point attendance from ticket sales and complimentary tickets were broken out separately. The peak year for the festival was 2017 when it hit attendance figures of 3,516 tickets sold, and 6,800 total attendees and the festival became profitable for the first time.

Addington said “for the fourth year in a row we are being named as a Top 50 film festival worth the entry fee by Movie Maker Magazine.”

The film festival provides a significant economic boost to the local community in increased tax revenues, and dollars spent at local businesses, according to Addington. She said more than 50 percent of ticket sales are to attendees outside the immediate area.

In addition to movie goers, the film festival brings in film makers and associates connected with the films screened, along with judges and film reviewers. Add to that the number of locals who attend the festival and you have a substantial throng of spenders in Oxford for festival week

Neither the Oxford Chamber of Commerce nor Visit Oxford has conducted an economic impact study to measure the festival’s influence on the economy, but Addington said the festival itself has engaged an Ole Miss student to conduct a study and produce an accurate and comprehensive assessment.

U.S. Senator Thad Cochran (R-MS) is chairman of the Senate Appropriations Committee, and as such will have first crack at the budget the Trump White House sent to the Senate. The budget goes to the committees in the two houses in congress for review and modifications before it is released for a floor vote.

Stephen Worley is a staffer in Cochran’s Appropriations committee. He said that during the review process the committees make revisions until they have a budget that will pass both houses and will be signed by the president.

“No one knows what the final outcome will be … There are a number of steps and a number of months before anything is final. The (White House draft) budget is for Fiscal Year 2018, which runs from Sept. 30, 2017, to Sept. 30, 2018. A more detailed, formal FY2018 budget is expected to be released and sent to Congress in May of this year,” Worley said.

The measure passed by congress this week to prevent a government shutdown will fund the federal government until the end of the fiscal year (2017) in September. It has been reported that this stop gap legislation holds spending for arts and humanities at previous funding levels. But cuts in federal spending passed down to the state would be realized only when the 2018 federal budget is passed into law, and the Oxford Film Festival won’t be forced to deal with those until the 2018 or 2019 Mississippi budget reflects federal cuts.

Edward Connolly, is a freelance journalist living in the Adirondack region of New York State. He studies at the Meek School of Journalism at Ole Miss. He can be reached at Connolly@journalist.com