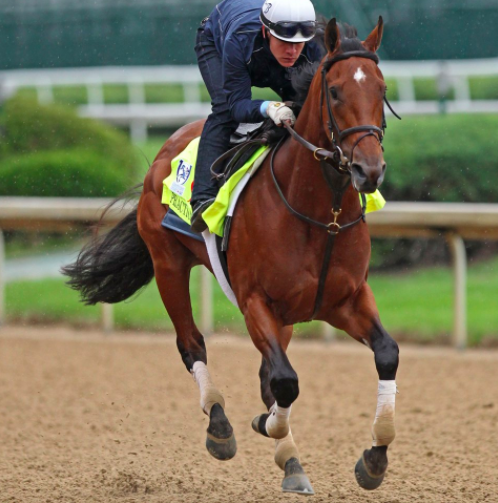 Here are the latest horses odds (the morning odds are in parenthesis):

Churchill Downs officials say attendance for the Kentucky Derby is 158,070.

That’s the seventh-largest crowd in the race’s 143-year history.

It’s rained on and off Saturday, making for muddy conditions on the track and puddles on the pavement.

The weather challenged fashionable fans to party in multiple conditions, with moments of sunshine, too.

Always Dreaming and Irish War Cry are the co-favorites for the Kentucky Derby at 9-2 with an hour to go until the race.

McCraken is the 6-1 third choice.

Every other runner is in double digits, including Patch, the one-eyed horse, whose odds have dropped throughout the afternoon. He is down to 12-1.

Fans are breaking out their ponchos again as Churchill Downs has been soaked by another round of showers before the Kentucky Derby.

The sun broke through the clouds early in the afternoon Saturday after a gloomy morning, allowing fans to discard their rain gear and show off their best Derby outfits.

But the rain returned late in the afternoon, prompting many fans to seek whatever cover they could find at Churchill Downs. Others sat through the rain, looking over soaked programs to consider any final bets leading up to the Kentucky Derby.

Red Sox legend David Ortiz emerged from the terrace outside the exclusive Turf Club, a bourbon on the rocks in hand, and pondered which Kentucky Derby horse he should put his money on.

“I gotta make some money. Mama needs a new pair of shoes!” said Ortiz, in a pinstripe suit with a feather in his fedora. “And she likes Christian Louboutins so you know it’s got to be a lot.”

It was his first Derby, and his first trip to Kentucky. He said he’s having so much fun he hopes it’s not his last.

Other celebrities in the crowd at Churchill Downs: Larry David, Kid Rock and Guy Fieri.

A switch to turf turned Arklow into a stakes winner.

The colt trained by Brad Cox is 2 for 2 since shifting to turf after losing all five of his races on dirt. He posted one-length upset in the $300,000 American Turf for 3-year-olds on Saturday at Churchill Downs in a race leading up to the Kentucky Derby.

Hall of Famer Mike Smith was aboard as Arklow rallied six-wide in the stretch to beat Good Samaritan. Arklow ran 1:44.64 for 1 1/16 miles.

Wild Shot rebounded from a seventh-place finish in the Blue Grass Stakes to pull an 8-1 upset in the $250,000 Pat Day Mile for 3-year-olds on Saturday at Churchill Downs.

Unlike the Blue Grass where Wild Shot set the pace, jockey Corey Lanerie kept the colt in second this time as Uncontested set the pace for the race in the undercard of the Kentucky Derby. Turned loose at the top of the stretch, Wild Shot sprinted away to a four-length victory.

The colt was bred and is owned by historic Calumet Farm. Trained by Rusty Arnold, Wild Shot paid $19.40 to win.

The red carpet at the Kentucky Derby annually attracts a barrage of reality TV stars, athletes, media figures and other celebrities.

“Goodfellas” actor Paul Sorvino got the biggest applause this year as he serenaded the media crowd at Churchill Downs with a rendition of “My Old Kentucky Home” in his best operatic voice. He got a high-five from a fan and a kiss from his wife.

Bon Jovi guitarist and New Jersey native Richie Sambora shouted “Jersey in the house!” and Katie Couric went out of her way by walking into the crowds that stand behind a media row and snapping selfies with fans.

Couric says she turned 60 this year but can still rock a pink fascinator hat on Derby day.

With four hours until the Kentucky Derby is run, Always Dreaming remains the 4-1 favorite in the wagering.

So far, bettors are shunning Classic Empire. The colt who was made the 4-1 morning line favorite on Wednesday is now 8-1.

Sentimental favorite Patch, the one-eyed colt, is 14-1, down from his 30-1 morning line odds.

Trainer Chad Brown won a second stakes Saturday on the Kentucky Derby undercard when Roca Rojo prevailed by a head in the $300,000 Distaff Turf Mile.

The race ended with a head-bobbing finish as the pacesetting Believe in Bertie and Roca Rojo hit the wire together. The photo awarded the victory to 6-5 favorite Roca Rojo, her sixth in eight starts.

Florent Geroux guided her over the mile in 1:37.53 on a rain-softened turf course.

A determined Paulassilverlining held off 3-2 favorite Finest City by a neck to win the $300,000 Humana Distaff, the first stakes race on the Kentucky Derby undercard Saturday at Churchill Downs.

The 5-year-old trained by Chad Brown has been a model of consistency. This was her third straight stakes victory, improving her record to 10 wins in 20 career starts.

She took charge entering the turn and was pressured in the lane by Finest City, winner of the Breeders’ Cup Filly & Mare Sprint last year.

Jose Ortiz guided Paulassilverlining over the seven furlongs in 1:23.68 over the sloppy track. She paid $7.60 to win.

If you’ve ever had mud splashed on your windshield, you know annoying it can be.

Jockeys face the same challenge on a sloppy track like at Churchill Downs on Kentucky Derby day. And they don’t have the advantage of flicking on the wipers.

Mud is constantly kicked back into the faces of horses and riders when rain turns the dirt surface into a substance similar to pudding.

It’s hard enough for a jockey to maintain balance on a 1,000-pound thoroughbred under ideal conditions. Riding while blinded by a coat of slop is nearly impossible.

Jockeys compensate by wearing multiple sets of goggles. When one pair gets dirtied, the rider pulls it down around his neck. The process is repeated throughout the race to keep the mud at bay.

Celebrity chef Bobby Flay has cooked up a winner on Kentucky Derby day.

His 3-year-old colt Caviar Czar won his first race on the undercard. It came on the third try for the Ireland-bred horse.

It was a satisfying victory for Flay as he was also the breeder. John Velazquez was aboard as Caviar Czar paid $8.20 to win.

The timing was perfect since Flay was already at Churchill Downs for a cooking segment on NBC’s Derby telecast.

The chef known for “Iron Chef America,” regular TV appearances and several restaurants is a longtime owner and breeder who has had success in the Breeders’ Cup world championships.

Steve Buttleman walked into a riser near the stage at the post-position draw on Wednesday and hit a shin, rupturing the quadriceps tendon in his left leg.

As a result, he’ll be wearing a bulky brace over his white pants while he plays “Call to the Post'” at his 22nd Derby on Saturday.

He’s set to have surgery on Tuesday.

Always Dreaming is the favorite in early wagering on the Kentucky Derby.

The Florida Derby winner is at 4-1 odds.

Classic Empire, the 4-1 morning-line favorite, hasn’t generated much support yet. His odds have drifted up to 7-1.

The late-running Gunnevera is taking action. After opening at 15-1 on the morning line, his price is now 9-1.

The sentimental choice is Patch, the one-eyed colt. His story has captivated many fans and apparently their wallets, too. Listed at 30-1 from the outside post in the 20-horse field, Patch is 15-1.

The odds will fluctuate throughout the day as money pours in from fans at Churchill Downs and those wagering online and at simulcast locations.

Three races are in the books leading up to the Kentucky Derby, where cold and wet weather has forced spectators to bundle up and use colorful hats for function rather than fashion at Churchill Downs.

A third straight day of rain has dampened fans gathered Saturday under the Twin Spires in 48-degree weather. Track conditions are rated sloppy for horses slogging through the mud in a light but steady drizzle.

The weather is forecast to improve by the time the Derby is run around 6:46 p.m. Eastern time. Always Dreaming is the 4-1 favorite in early wagering.

Some women are covering their elaborate hats in plastic and wearing rubber boots to protect against the soggy weather.