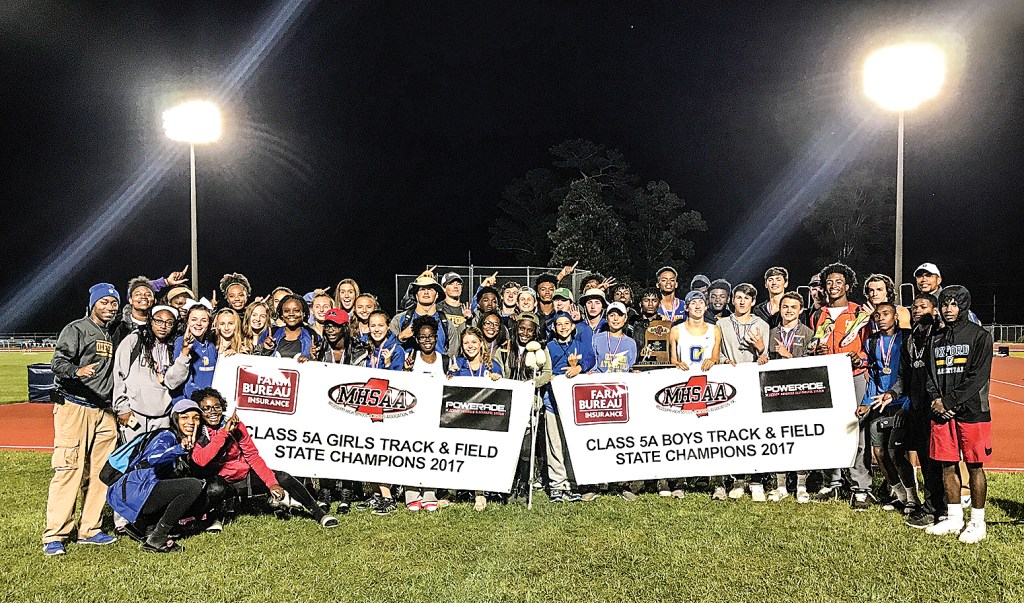 Members of the Oxford boys and girls track & field teams pose with the championship banners and trophies after winning the MHSAA Class 5A championships Friday at the Woody Barnett Track & Field Complex in Pearl. (Jake Thompson)

PEARL — Every point matters. That is a lesson Oxford’s girl’s track team learned on Friday.

It is the second straight state championship, fifth overall, for the girls and helped complete a sweep with the boys’ team, which dominated the field, in back-to-back years at the Woody Barnett Track & Field Complex on the campus of Pearl High School. It was the final year for Oxford to compete in 5A, at least for the next couple years, as they will move up to 6A starting in August.

“We actually limped into the meet,” Oxford girls coach Chris Patton said. “Things never go the way you want them to. Actually, this is one of those days where they never faltered. That’s what it takes. You have to be a competitor.”

The day started off slow for the girls in the field events with defending shot put state champion Monya Baskin faltering a bit and finishing in fourth place with teammate Briunna Ducksworth coming in fifth. The field events continued to be an issue with Kathleen Patton missing the podium in the high jump by two inches, finishing fourth. Teammates Kyla Johnson and Mia McKey finished fifth and sixth, respectively. The field events were salvaged in the pole vault competition with Elizabeth Duperier and Charli Kendricks finishing first and second, respectively.

The pole vault results came at a much-needed time in the afternoon as Oxford was trailing West Harrison by 14 points, but the 18 points from Duperier and Kendricks paired with a first-place finish in the girls’ 300-meter hurdles by Ashley Epps gave the Chargers a much-needed boost.

“That was huge,” Patton said. “I think some of them get discouraged throughout the day. But like me, I don’t even check the points total and if we just come here and compete and do our best, the results are going to be in our favor regardless.”

The drama was not nearly as exciting on the boys’ side of the competition with Oxford nearly lapping the field with 177 points for their fourth consecutive state title and ninth title overall since 2002. Runner-up Hattiesburg finished with 87.5 points while Brookhaven (65.5), West Harrison (39.5) and Canton (38) rounded out the top five.

There were not a lot of first-place finishes for Oxford this year, but with Canton leaving the 5A North Half meet early last Saturday to make it to their prom, it allowed the Chargers to bulk up their qualifying numbers and get runners into races they may not have qualified for otherwise.

“I’m very proud,” Oxford boys coach Chris Bush said. “Everything didn’t go our way and our guys had to get refocused about midway through and finished the day strong enough. That’s what we did. They had their head on straight, and everybody did what they were supposed to do and with that we walk away with another (state championship).”

The lone win on the day in the field events came from D.Q. Thomas in the discus throw while teammate Quentin Wilfawn placed second. Wilfawn also placed third in the shot put while Thomas placed third in the triple jump to begin the day. Devin Rockette competed in two field events, placing second in the long lump and finishing fifth in the high jump. Jackson Dear rounded out the field-event competitors with a third-place finish in the pole vault.

The track events saw Oxford only take home four individual titles. Jaquan Webb won the 200-meter dash while Cameron Epps won the 400-meter dash and Kyle Rock won the 800-meter run. In the relays, Oxford won one of the four events, taking first in the 4×400 meters.

“One of my favorite moments today is Cameron Epps winning the 400,” Bush said. “Cameron did not run a bit last year. I didn’t even take him on a meet. Then he put in the work this year and he made the trips and it culminated in him being the 400 (meter) state championship for him. I’m very proud for him.”

Oxford also had five second-place finishes in track events along with third-, fourth- and fifth-place results.