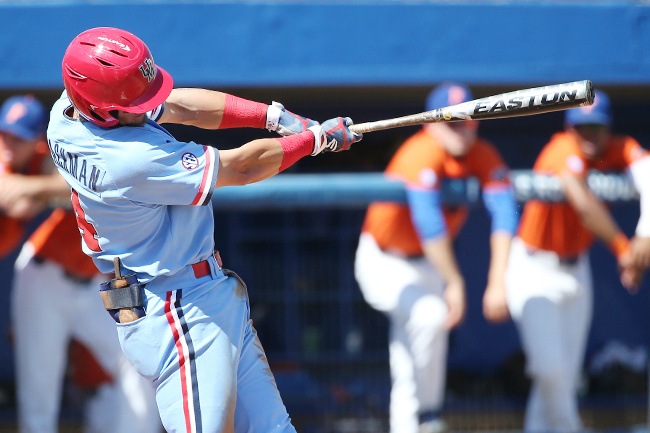 Ole Miss did nothing to help its postseason chances this weekend.

No. 7 Florida finished a sweep of the Rebels with a 6-4 win Sunday at McKethan Stadium. It’s the second time Ole Miss has been swept in a Southeastern Conference series this season.

Ole Miss (29-20, 11-13 SEC) tried to play catch-up after the Gators (35-13, 16-8) got to David Parkinson for a run in the third and chased the junior left-hander with two more in the fourth. Florida had its biggest inning against Greer Holston in the fifth, getting to the freshman for three earned runs to make it 6-1.

Nick Fortes led Ole Miss offensively, going 3-for-4 with two RBIs. Tate Blackman had two hits, including his 8th home run of the season, while Colby Bortles’ second career triple in the eighth plated a run.

Fortes’ RBI groundout later in the frame cut Florida’s lead to two. Thomas Dillard drew a leadoff walk in the ninth to bring the tying run to the plate, but three straight flyouts capped a weekend of missed opportunities for the Rebels, who fell to 8-16 in games against top-50 RPI teams.

Ole Miss, which was projected as a 3 seed in the NCAA Tournament by Baseball America and D1Baseball.com before the weekend, likely needs to win its last two series against No. 15 Texas A&M and No. 4 Auburn to solidify an at-large berth before the SEC Tournament. Ole Miss, which has an RPI of 35, will host the Aggies starting Friday.

Parkinson (5-3) took the loss after allowing the three runs — all earned — on five hits while walking one and striking out two in 3 1/3 innings. Will Stokes, Houston Roth and Will Ethridge combined to hold Florida to two hits over the final 3 1/3 innings, but Dillard’s free pass was the only baserunner the Rebels mustered over the final 1 2/3 frames against Michael Byrne, who notched his 13th save.