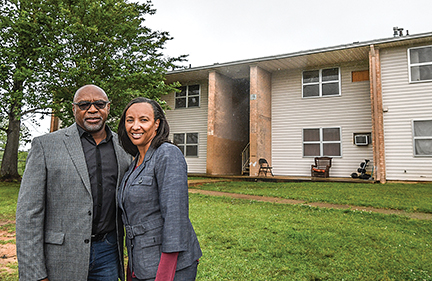 This is one of several stories the EAGLE will be publishing in regards to the lack of affordable housing issue in Oxford and Lafayette County throughout the year.

Regarner Thompson grew up in Oxford, living for most of her childhood and teen years at Riverside Place in Building 104 with her four siblings and her mother.

Today, she’s a registered nurse and executive of a Fortune 500 home health hospice company. However, she never forgot where she came from and wants to show others that they too, can grow and improve their situations.

And that starts with having a home — a place they can be proud of; a place where they’re not singled out because of their financial situation.

“I am Riverside,” Thompson said Thursday.

The public housing complex, operated by the Oxford Housing Authority through the U.S. Department of Housing and Urban Development, sent out letters on Feb. 3, 2015, to roughly 90 tenants informing them the contract with the city of Oxford would not be extended. It ended Feb. 28, 2017.

Riverside residents have to find a place they’d like to live, whether in Oxford, Lafayette County or another state, and OHA will issue a voucher to landlords to pay the residents’ rent, as long as they continue to meet the financial requirements of OHA.

A purpose in coming home

Thompson and her husband, Mike, moved away from Oxford for about 28 years. They moved back about two years ago.

“I asked the Lord what would he have us do here,” she said. “Why are we moving back? What’s our purpose?”

Thompson read the news about Riverside closing and knew immediately why she was called back to Oxford.

“It came to me that our purpose is to help these people who live where I had lived,” she said.

The Thompsons met with long-time friend and CRYE LEIKE Realtor Tim Phillips and the three came up with a plan.

Just a few months later, the Thompsons have purchased four houses in Oxford that they will lease to Riverside residents who still need a home, or other families on public housing assistance who have vouchers from other areas moving to Oxford.

“We’re all the same,” she said. “So why should some people be put into a box somewhere? People think if you are public housing you’re this way or that. But that isn’t true. They’re no different than anyone else. They’re just struggling.”

“We wanted to do something to honor them,” Thompson said. “Those families in Riverside are my families. I don’t see them as different than me. We’re all loved by God the same and they should be able to go out and find housing throughout the community and not be kept separate and disassociated from the rest of the community.”

“We went to the Housing Authority before closing on the homes to find out all we needed to do to be able to accept the vouchers,” said Mike Thompson, who also grew up in Oxford and is currently head pressman for the Oxford EAGLE.

“These are homes I’d live in,” Regarner said. “They’re all three to four bedrooms with two to three bathrooms with yards.”

The Thompson are hopeful they can help be part of the solution in the lack of affordable housing in the LOU community.

“We all deserve good things,” Regarner said. “Not saying growing up in Riverside wasn’t good. I thought it was. It was my home. But I look at Oxford being a growing and thriving community with million dollar homes and all this nice stuff. But we have families here we’re not doing a very good job taking care of.

“This isn’t about us. This isn’t a handout – it’s a hand up. If we can encourage others or the city to get more involved in providing affordable housing, then that’s when things will change.”