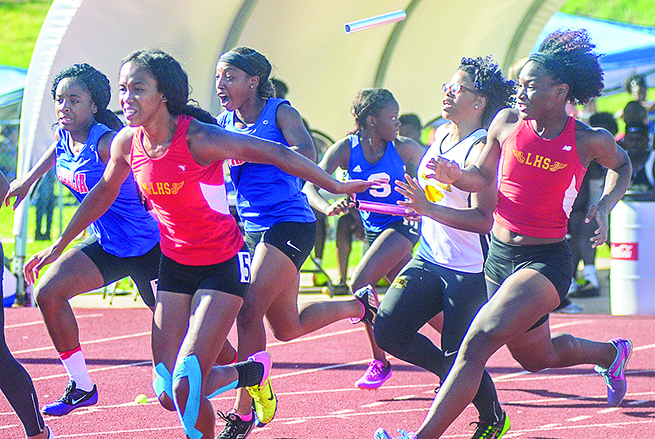 Lafayette’s Xhiir Burgess, right, loses the baton while Orianna Shaw, left, reaches for it in the final transfer during the 4x100 meter relay on Saturday during the MHSAA Class 4A state championship at the Woody Barnett Track & Field Complex at Pearl High School. (Jake Thompson)

PEARL —Brandon Turnage ran the 800 meter as a ninth grader and came away with a second place finish in last year’s Class 4A state track & field state championship. This year, Turnage chose to not run in the 800 meter but decided to instead cut the length in half and compete in the 400-meter dash. It turned out to be a good decision as Turnage came away with the state title with a time of 50.72 seconds during Saturday’s Class 4A state meet at the Woody Barnett Track & Field Complex on the campus of Pearl High School.

He cut his qualifying time by nearly two seconds from a week earlier in the 4A north half meet held at Pontotoc High School.

“I kind of knew that was what I was going to run,” Turnage said of his state meet time. “The only reason I had the 52 (seconds) was because the Pontotoc track is a slow track and the wind was blowing real hard. This is what I usually run.”

Turnage highlighted what was a positive day for the Lafayette High track team. While Turnage was one of only two boys events the girls had a chance to give the team title a chase with athletes competing in seven events. It was not to be though as the Commodores fell short of the top-three on the girl’s side, finishing with 44 points and 12 points shy of third place Senatobia. McComb’s girls took the 4A title with 113 points.

The day got off to good start for the Commodores with Mariah Holland and Xhiir Burgess competing in three field events. Holland came away with the shot put state title thanks to a throw of 36-feet, two-inches. It was two inches shy of her qualifying mark. Burgess finished with a third place in the triple jump and missed the podium in the long jump by half a foot, placing fourth.

On the track, senior Orianna Shaw was gunning for her third 400-meter dash state title in the past four years. Shaw and McComb’s Shayla Felder entered the race with the top two times, both coming in under a minute. Felder ruined Shaw’s chance for glory one last time as the Tiger sprinter edged out Shaw by .03 seconds with a time of 57.71.

There was won surprise on the day for Lafayette, as they came away with the 4×200 meter relay with a time of one minute and 46.03 seconds, besting South Pike by .40 seconds. The Commodores entered the race with one of the slower qualifying times.

With results no lower than fourth place in the first half of the day, Lafayette was looking to potential find their way into the top-three, but they were going to need near perfect results in their final events. That potential finish was dash though in the 4×100 meter relay as Burgess and Shaw dropped the baton on the final exchange when Shaw, the anchor, was unable to grab it when the baton flew out of Burgess’ hand and Lafayette was disqualified from the event.

“Somebody got there too early or something got misjudged, obviously,” Mikell said. “That’s 4×100. I’m surprised it doesn’t happen more often than it does, honestly. The 4×200 kind of made up for it. We weren’t really expected to win the 4×2. We thought we’d be in it”

Ty Benson placed fourth in the girls 300 meter hurdles and the boys 4×400 relay team of Braylon Williams, Eric Ragsdale, Michael Fortner and Shaheem Adams placed sixth in one of the final races of the day.