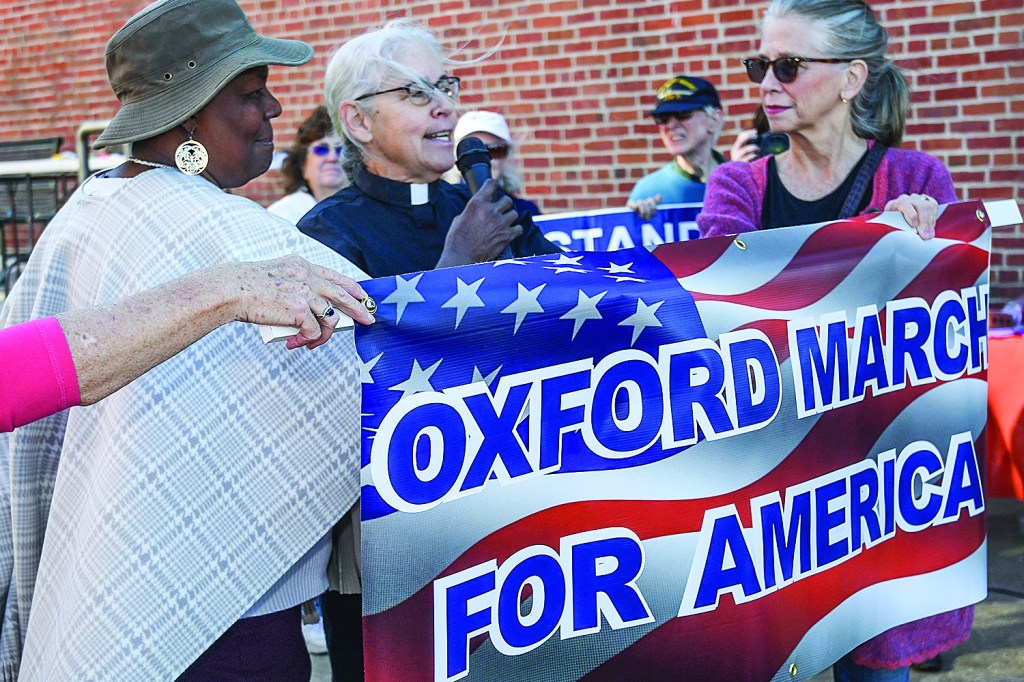 Wind rocked the frame of the barn that Gail Stratton and her dad were building. From the roof they felt the structure sway as they put down the barrier that would keep the family’s new horses dry and safe, racing the storm heading their way. Gail was about 12. Her father, Bill, was a physicist at the Los Alamos National Laboratory—not an expert builder. Still, it had to get done.

Gail, now a biology professor at the University of Mississippi, and her dad spent a lot of time together during her childhood, often horseback riding and skiing. Bill relished projects that took him to the place where knowledge ends and experimentation begins, which became a lifelong model for her.

That day in Los Alamos they didn’t hesitate. With the storm soon approaching and the wind threatening to destroy their latest project, they climbed down and hammered in a 2×4 as a brace. For the next 50 years, no storm would prove wild enough to topple it.

Gail Stratton stands outside of the Lafayette County Chancery Building in August of 2014 where she obtained her out-of-state marriage license.

“(Dad) was a very reflective person. He had some sayings that have been helpful to me. He said, ‘There are creators and there are critics. If you have a choice, be the creator, but know that there’s going to be critics.’” Gail said.

“There are people who take it as their job not to do anything but to criticize others,” Bill would tell her. “I started thinking about my friends,” Gail said, “and sure enough there are the ones out doing stuff and the ones just sitting back.”

Gail is not one of those people. Aside from being a lecturer and researcher specializing in wolf spiders, she was recently ordained as a Unitarian Universalist minister at 62. It was in this capacity that she delivered a message focusing on action and inclusion at the Oxford March for America on January 21.

Being out front and heard in a way she rarely experiences in the academic world is just another opportunity for Gail to put into practice the wisdom her father passed down to her.

“In ministry, there’s a part of me that doesn’t want to do anything until I know exactly the outcome, and that’s not how it works,” she said. “You’re not in charge of the outcomes. You give what you can of your heart and your soul and then it’s a co-creative process. In terms of what I have to offer, I need to not worry about (criticism). I know it exists and that’s fine.”

The curiosity that has been with her from an early age and pushed the boundaries of her world is reflected in the variety of interests that were vital to her development.

“Saturdays we’d go to the library,” she said. “At one point I thought I would read every book. I grew up in a family that read, and so I knew that books were doorways into interesting places.”

If a topic interested her, Stratton would go after it enthusiastically. When a high school teacher suggested independent study, she immediately read a book on botany. She discovered her interest in spiders was even stronger, and she wrote 40 pages about them as a high school junior. Her mother accepted the immense task of typing the volume, in the process learning more than she’d wanted about the arachnids.

“I think I was curious about (spiders) because you quickly got to the edge of what people knew about them,” she said.

She had a desire to learn everything she could about a variety of topics, her curiosity sometimes outstripping her still-developing capacity to understand.

“I committed myself one day to reading everything Martin Luther King Jr. had written,” she said. “I discovered that he did his dissertation on Henry Nelson Weiman. I couldn’t understand a word. I remember puzzling on it. And what’s really interesting is that now in my later years I’ve come back to find (Weiman) to be a very important theologian.”

King’s efforts and ideas in the dimension of social justice have been hugely influential on Gail. Her observation of spiders, too, has influenced her thoughts, and these disparate interests, developed in childhood, have come to intersect in a surprising way.

“I think a lot of people have fears, of spiders, of snakes, even of other kinds of people, fears of gays and lesbians, that go way, way, way back to when they were really little,” Gail said. “I think those fears that we learn before language are the fears that we hold so deep that we call them natural.”

Gail moved to Oxford to be with her partner, who has since become her wife. She believes that curiosity about people who are different from us and a desire to learn can counteract prejudice.

“I know it’s not just that simple for everybody, but I think that’s applicable to humans in general, is to understand our fears,” she said. “Everybody has a spider story, and not uncommonly people say they’re terrified of spiders. As a kid I was supposed to be clipping the grass along the base of the house, and there was a spider and it scared me, so I quit the job. But when I started to learn about them the fear eased, and in fact, it became wonder.”

Gail believes that we all carry the divine spark. It may go unnoticed by too many of us, but there is a creative force inherent in curiosity and openness to the contributions of others. As legacies go, she can think of none more important than giving back to the world the same sense of wonder that has so enriched her life.

“I’ve had so many people tell me, ‘I look at spiders differently now. I stop and notice how beautiful they are,’” she said. “If I could leave curiosity in the world, not only about spiders but about people, about how the world works, I think that’s the gift I could potentially give.”

My afternoon with a famous sportscaster