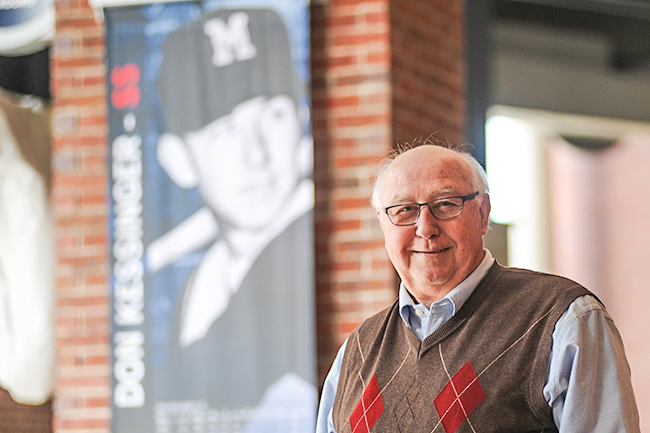 Add another accolade to the list for Don Kessinger.

Kessinger, the former Ole Miss All-American and six-time MLB All-Star, has been named a member of the 2017 Southeastern Conference Baseball Legends class. Kessinger will be honored during the SEC Tournament, which will be held May 23-28 at the Hoover Met in Hoover, Alabama.

Kessinger is the second former Ole Miss player to earn the legend distinction from the conference along with Jake Gibbs, who was honored in 2014. He’s joined in this year’s class by former LSU pitcher Ben McDonald, former Missouri shortstop Dave Silvestri and former South Carolina pitcher Earl Bass.

“The Southeastern Conference has a rich tradition in the sport of baseball,” SEC Commissioner Greg Sankey said in a statement. “Through our legends program, we are pleased to honor the individuals who have helped establish a foundation for the current and future success of our programs and the opportunities available to our student-athletes today.”

The patriarch of Ole Miss baseball, Kessinger starred for the Rebels from 1962-64 with his .400 career batting average still the best in program history. His .436 clip during the 1964 season is the highest single-season average in Ole Miss history.

He spent 16 years in Major League Baseball, most of those seasons coming as the Chicago Cubs’ starting shortstop. All of his All-Star games came with the Cubs while he also won two Gold Glove awards and set a then-MLB record of 54 consecutive games without an error at shortstop in 1969. He also played for the Chicago White Sox and the St. Louis Cardinals.

Kessinger, who lives in Oxford, coached Ole Miss for six seasons after his playing days. His sons, Keith and Kevin, also played for the Rebels while his grandson, Grae, is Ole Miss’ starting shortstop.