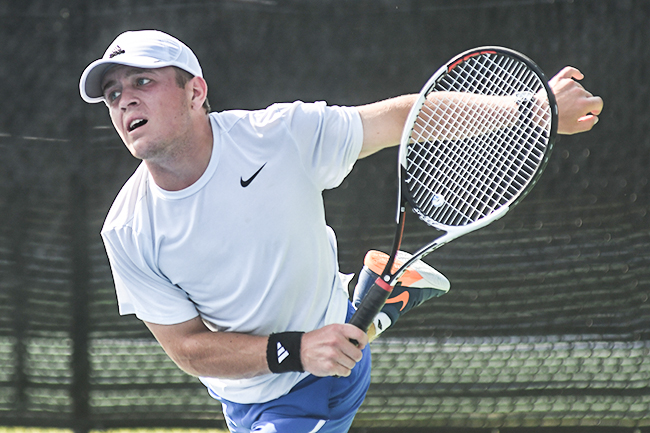 Oxford High’s Bo Nash plays against Ridgeland’s Daruis Kent during boys singles in the MHSAA Class 5A individual tennis tournament at the John Leslie Tennis Courts on Wednesday, May 10, 2017. Nash won 6-3, 6-1 to claim the state title.

There are not many accomplishments the Oxford High tennis team has not checked off. On Wednesday morning, they managed to find one box that had not been checked. For the first time in program history, the Chargers swept the individual state titles in the same season, winning all five of the MHSAA Class 5A tournaments at the FNC Tennis Center.

It capped off a week which began with Oxford claiming their 10th straight team state championship on Monday morning, carrying the momentum all three days.

“It’s been a great three days,” Oxford tennis player Bo Nash said. “It’s always really fun to win it for the team because you’re out here with this great group of guys and girls and you win it with them for your school.”

Nash had a battle in the boys’ singles championship against Ridgeland’s Daruis Kent. He won with a straight-set 6-3, 6-1 score, but it was not as easy a victory as Nash’s previous three rounds had been with Kent going up 2-0 to begin the match before Nash was able to win six of the final seven points to claim the first set.

“(Kent’s) pretty strong,” Nash said. “I knew I had to fight back pretty quickly. He has a big serve, big forehand. So I knew if he got those going I was going to be in trouble. I was able to kind of weather out the storm, hang in there and wait until he would miss.”

Before the day even began, Oxford was guaranteed at least two individual titles with both the boys’ and girls’ doubles matches being an all-Charger affair. The girls’ championship was between Hailey Lowery and Olivia Williams along with Anne Hardy and Claire Stevens. The duo of Lowery and Williams knocked off their teammates with a 6-2, 6-3 victory.

The boys’ title match put Ryan Mounce and Max Mauney against teammates Chris Le and Eli Abel. Mounce and Mauney won 6-1, 6-2. Playing against your own teammates comes with the chance that it could become more of a practice match than one for a state championship.

“It’s more fun, without a doubt,” Mounce said of playing against his teammates. “Because you see these guys every day in practice and it’s always fun to compete with two seniors on the court. … Sometimes you forget. It’s easier to lose focus because you’ll kind of start messing with each other, but it’s a lot of fun.”

The mixed doubles pair of Gordon Whitwell and Amanda Lowery finished off the morning with a 6-0, 6-3 win over Grenada’s Macie Craddock and Micah Williams to complete the historic day for the Chargers.

Wednesday’s action completed a week where Oxford racked up state titles amongst a backdrop of their home fans as John Leslie Courts hosted the 5A, 3A and 1A/2A state tennis championships. The feeling quickly became one of a home-court advantage for the Chargers as the week progressed.

“We had a great group of fans out here,” Nash said. “Instead of not having everybody here, now you can have all the families come here and come out and support. It felt like a home match because we’re out here every day having fun.”

The gold medals were not solely exclusive to Oxford as Lafayette’s tennis team picked up a state title on Wednesday as well. Ally Bowen won the Class 4A girls’ singles championship, defeating Newton County’s Kennedy Rodriguez 6-3, 7-5. The 4A and 6A state championships were held at Parham Bridges Tennis Center in Jackson.

How Mike Smith has taken Ole Miss softball from…