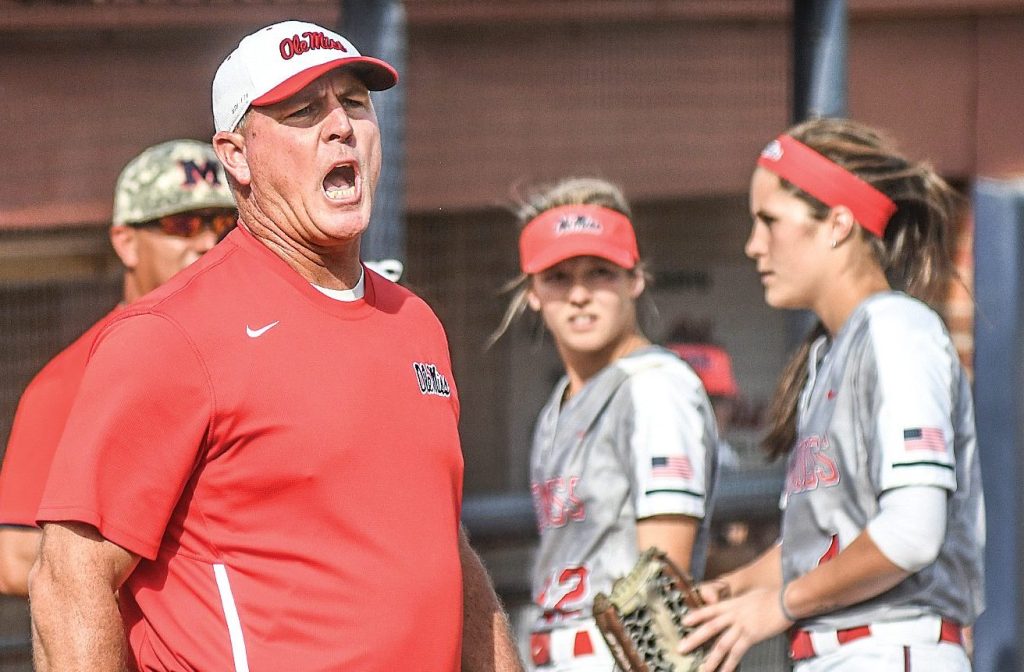 Mike Smith knew he wanted to coach in the Southeastern Conference, but not all of the league’s softball programs are created equal.

So when Smith was in the running for the Ole Miss job — one of the nation’s worst in non-revenue sports — he called some of his peers in the profession, including a few around the SEC, to get a sense of exactly what he was getting into. The feedback was unanimous.

Can’t win there. A dead-end job. Possibly a career killer.

Yet that perception only made the opportunity more attractive to Smith.

“Those are some things that were said, but really that didn’t matter to me,” Smith said. “That actually fueled my fire even more. I think that’s the type of program that I love being around. When somebody can tell me I can’t do something, I’m just going to do whatever I can to try to not so much prove them wrong but just prove to myself that I can do this and that we can do it.”

Relative to its past, Smith’s program is doing it big.

No. 19 Ole Miss will play in its third straight SEC Tournament today — a notable accomplishment considering the program had just one winning season before Smith’s arrival. The Rebels, looking for their second-ever tournament win, will take on Mississippi State at 1:30 p.m. with the winner advancing to take on No. 1 Florida in the second round Thursday at Tennessee’s Sherri Parker Lee Stadium.

Win or lose, Ole Miss’ resume is already good enough for a second straight NCAA Tournament berth after Smith led the Rebels to the first regional appearance in school history a season ago. Ole Miss is one of just 13 teams nationally with at least eight top-25 RPI wins, though the Rebels will need a couple more this week to put themselves in realistic position to be a regional host.

Ole Miss has an RPI of 23 and almost certainly needs to crack the top 20, Smith said, to be seriously considered as one of the NCAA Tournament’s top 16 seeds, the kind of position Smith could only dream of having his program in when he took over three years ago.

“I would’ve said absolutely not,” he said.

It’s been a meteoric rise from the SEC ashes that even Smith’s players would have a hard time believing if they weren’t experiencing it first-hand.

“Not at all,” said senior infielder Dakota Matiko, who transferred to Ole Miss two years ago after starting her career at McNeese State under Smith. “But I can tell you it’s one of the best feelings.”

Smith thrived in his previous stop at McNeese, leading the Cowgirls to three straight 30-win seasons and back-to-back Southland Conference championships, their first regular-season titles since 1994. Smith led McNeese to a program-record 40 wins in 2014 on his way to Southland Conference Coach of the Year honors.

The Rebels went through four coaches in their first 18 years of existence after the school started a softball program in 1997. Ole Miss bottomed out with three straight losing seasons and the worst record in the SEC two straight years under Windy Thees, whose firing in May 2014 began another coaching search that ended with Smith a few weeks later.

“We were the doormat,” Smith said. “Everybody wanted to play us.”

It made for a seemingly perfect marriage between a coach who specializes in resuscitation and a program in dire need of it.

“He has a way of turning programs around and making them into something that you never thought they could be,” Matiko said. “You see his passion when he coaches, and he just wants the best out of us.”

Smith also demanded accountability from his players, immediately making structure and discipline staples of his program. It wasn’t always easy for the coach coming from a smaller school to get his message through to a new group of players, but Smith said he asked his team to trust him and his resume, which also includes an eight-year stint at California Baptist where he led the Lancers to the NAIA World Series each season and a national championship in 2009.

“The players, especially the ones that were left over from the previous program, we butted heads a few times,” Smith said. “They kind of wanted to do their own thing, and I said, ‘Listen, you’re either going to do it the way we want it to be done or you’re not going to do it at all.’ … You can have the best coaching staff in the world, but if the players don’t respond to what we’re trying to do, you’re not going to be as successful.”

Smith surrounded himself with strong assistants, plucking former South Florida lead assistant and recruiting coordinator Ruben Felix from the Bulls’ staff in 2015 to be a volunteer coach before promoting Felix to associate head coach last season. He tabbed former Arizona pitcher Taryne Mowatt, who played professionally for six seasons, as his pitching coach after the 2015 season, referring to Mowatt as “a godsend for our program with what she’s been able to do.”

In Smith’s first season at the helm, Ole Miss tied a school record with 30 wins, tied or broke each of the program’s offensive records and made its first SEC Tournament appearance in eight years. The Rebels followed up with a 2016 season so unique that the school labeled it the “Season of Firsts.”

Ole Miss shattered the previous season’s record win total with 41, putting together back-to-back winning seasons for the first time ever. The Rebels matched a program-best with 11 SEC wins after combining to win 12 the previous three seasons and upset then-No. 15 Georgia for its first-ever league tournament win.

The Rebels made their first-ever NCAA Tournament appearance in the Norman Regional, advancing to the regional final before being eliminated by eventual national champion Oklahoma. Ole Miss has racked up 107 wins during Smith’s tenure after winning 112 the five previous seasons combined.

“Coming in, he had warned me that there might be some negative perceptions about the program, and we’re really trying to turn that around,” Matiko said. “That’s very clear with the season that we had last year and this year, we’re just a group of girls that wants to change the culture of this program, we want to change the legacy, and we want to set a standard for everyone that comes after us.”

The success on the field, Smith said, has helped the Rebels on the recruiting trail regardless of where it leads. Smith, a San Diego native, has used his West Coast ties to sign players from California while New York, Virginia, Oklahoma, Texas, Kansas, Tennessee, Georgia, Alabama and Mississippi are also represented on the roster.

It’s still a challenge for Ole Miss to go against Florida, Auburn, Alabama and other established SEC powers for high-end recruits, but Smith said the chances of Ole Miss landing some of its top targets are more realistic now.

“We’re going to try to find the best kids, and if that means they’re all over the country, then that’s what we have to do,” said Smith, who was rewarded with a contract extension after last season. “I just feel like there’s a lot of talented kids out there, and we need to do our job and go find them. That’s the only way we’re going to be able to compete in the dog-eat-dog SEC.”

Ole Miss has 36 wins entering this postseason with 10 of those coming in SEC play, a number Smith is content with given the way his team responded to one of the toughest league schedules. Seven of Ole Miss’ eight SEC series came against ranked opponents, but the Rebels won four of their last six series after an 0-6 start to league play.

The highlights were a sweep of then-No. 11 LSU and taking two of three from then-No. 13 Alabama last month for Ole Miss’ first series win over the Tide in program history. They’re the kind of high-profile wins that further confirmed the Rebels’ progression in a conference that’s combined to produce three of the last five national champions.

“Those are games we’re never expected to win,” Matiko said. “Those are games that we come into and people are like, ‘Oh, maybe Ole Miss can take a game.’ But I really feel like we showed our potential. We showed everybody what we’re capable of.”

Said Smith, “I just felt like that and the Alabama series helped kind of validate that we’re a team to be reckoned with and that we’re not the Ole Miss of old, and there is a new team in the SEC you do have to worry about.”

Ole Miss has won most of its games by the book, ranking fifth in the SEC in fielding percentage (.974), sixth in batting average (.293) and eighth in ERA (2.22). Junior outfielder Elantra Cox, whose 77 hits are a school record, is one of the league’s top hitters, junior Kaitlin Lee leads the conference in innings pitched (192), and outfielder Kylan Becker is the program’s first-ever All-SEC first-team selection.

“It gives me a lot of gray hairs and white hairs I think,” Smith said. “I’ve never seen anything like it, but I love it. I love the resiliency of our team. I love the fight. I love the never-say-die attitude.”

It’s all got Smith and his program thinking bigger than ever.

“Ole Miss, really in three short years, has gone from the outhouse to … not to the penthouse yet, but we’re moving on up to the East Side,” he said. “We’re giving ourselves an opportunity to have a shot at playing for an SEC championship and a national championship.”