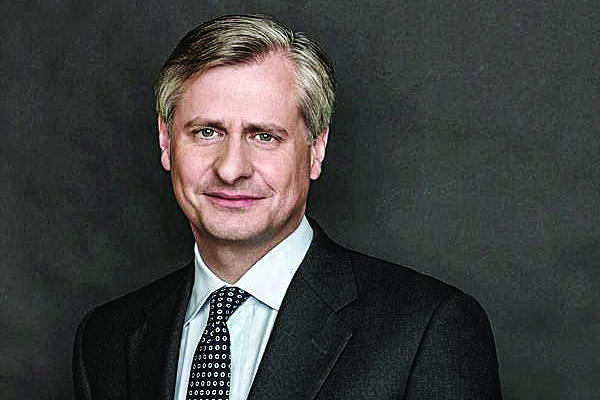 Jon Meacham, a prize-winning historian and commencement speaker at Ole Miss this weekend, will engage in a discussion about American politics with Andrew Lack, chairman of NBC News and MSNBC, in a special public program at 5 p.m. Friday at the Overby Center for Southern Journalism and Politics.

The event, sponsored by Mississippi Today, the Meek School of Journalism and New Media and the Overby Center, is free and open to the public. A reception will be held at 6 p.m. following the program, where guests will have an opportunity to meet and mingle with two of the nation’s most prominent figures in television news and commentary.

“Andy Lack is one of the most important news media leaders in the world,” said Charles Overby, chairman of the Overby Center. “And Jon Meacham is a one-man media conglomerate as a writer, book publishing executive, TV commentator and speaker. Having them on the same platform will provide great insights into our national political and media scene.”

Meacham is an executive editor and vice president at Random House, one of the nation’s leading publishing institutions. A former editor-in-chief of Newsweek, Meacham is a best-selling author of “Thomas Jefferson: The Art of Power,” “Destiny and Power: The American Odyssey of George Herbert Walker Bush,” and other books. In 2009 he won the Pulitzer Prize in the category of biography and autobiography for “American Lion: Andrew Jackson in the White House.” He is also a frequent guest commentator on politics and history on various network news programs dealing with current events.

Lack held top executive positions at NBC, CBS, and Bloomberg Media Group before returning to NBC to take charge of the network’s news division in 2015. As a producer at CBS in the 1970s and 1980s, he won ten Emmy Awards and two Peabody Awards, and he is credited with restoring credibility at NBC after network anchor Brian Williams was suspended for misrepresenting his experiences covering the war in Iraq.

Lack was the driving force behind the establishment a year ago of Mississippi Today, a nonprofit, online news organization that has become a prime source of investigative news stories and interpretative articles on breaking events.