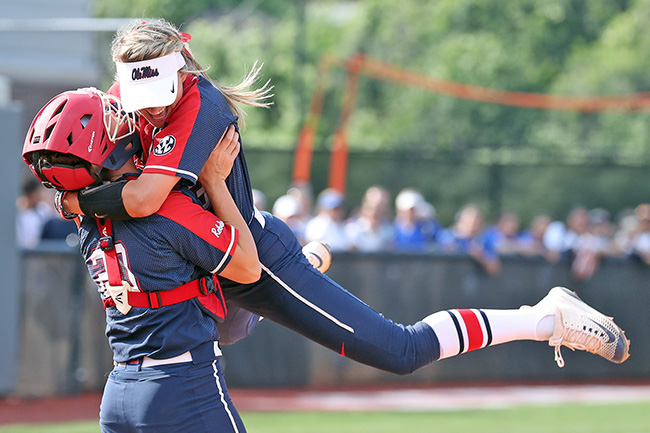 Ole Miss Softball vs Florida on May 11th, 2017 at the SEC Tournament in Knoxville, TN. Photos by Joshua McCoy/Ole Miss Athletics

The Rebels stunned No. 1 Florida with a 2-0 win Thursday in the quarterfinals of the SEC Tournament at Tennessee’s Sherri Parker Lee Stadium, pulling off just the second win over the nation’s top-ranked team in program history.

The 19th-ranked Rebels (38-18), who avenged a sweep to Florida earlier this season, handed the Gators just their sixth loss of the season for their second win of the tournament. Ole Miss, the tournament’s 8 seed, will face fifth-seeded Alabama on Friday at 2 p.m. in its first-ever semifinal appearance.

“Man I’m so proud of this team,” Smith said in an interview with the SEC Network.

It’s the ninth top-25 RPI win for Ole Miss, which began the week with an RPI of 23. The win over Florida, which also tops the RPI rankings, could bump Ole Miss into the top 20 and into the conversation to host its first-ever NCAA Tournament regional.

“We feel like we belong in the SEC,” Smith said. “I think that just helps our resume to host. I think the committee has tough decision with where we’re at.”

The win snapped Ole Miss’ nine-game losing streak to Florida (50-6), which was also the nation’s No. 1-ranked team when the Rebels upset the Gators in March 2014. Florida had only been shut out once this season until Ole Miss’ Kaitlin Lee (18-10) fired a two-hitter Thursday.

Lee, a junior right-hander, took a no-hitter into the fourth inning, retiring the Gators’ first 10 batters while facing just two over the minimum with four strikeouts. A two-out single brought the tying run to the plate for Florida in the seventh, but Lee got Aleshia Ocasio to pop out to make the Rebels’ early runs hold up.

“I think it’s No. 1 on my list (of softball accomplishments) I’d have to say,” Lee said.

Ole Miss struck for the game’s only runs in the first against Florida ace Delanie Gourley, who suffered just her fourth loss of the season. Elantra Cox’s leadoff single and an error put two on with two outs for Dylinn Stancil, who cleared the bases with a double.

The Rebels had seven hits in five innings against Gourley (18-4). Cox and Stancil each had two hits.

“Nobody expected us to win,” Cox said. “Why not want to do more and shock the world?”

How Mike Smith has taken Ole Miss softball from…