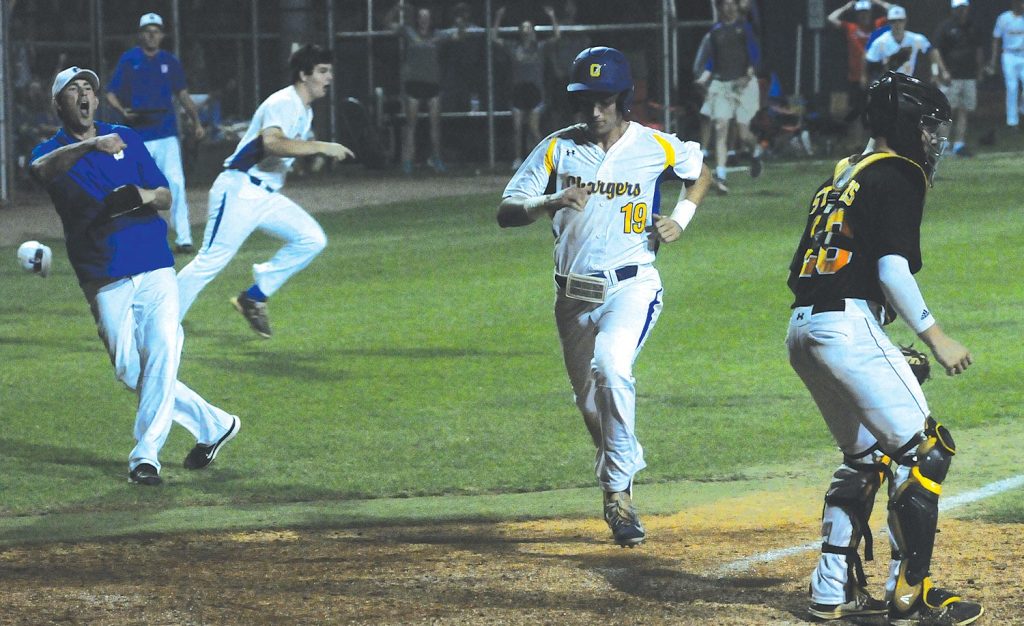 Oxford's Clark Stovall scores the winning run against New Hope in the seventh inning in Game 1 of the MHSAA Class 5A North Half championship series at Edwin Moak Field in Oxford on Thursday, May 11, 2017. Oxford won 5-4. (Jake Thompson)

When it comes to the postseason in baseball, role players are a commodity in high demand by their coach. Jacob Melendez proved how valuable they are on Thursday night. Coming in cold after sitting on the bench for six innings, Melendez pinch hit for Oxford left fielder C.J. Terrell in the bottom of the seventh inning. On the very first pitch he saw, Melendez hit a double to the wall after New Hope center fielder Nick Sims overran it, scoring Clark Stovall from second base and giving Oxford a 5-4 win in Game 1 of the MHSAA Class 5A North Half championship series at Edwin Moak Field.

The two-time defending Class 5A champions remained undefeated at home and are now one win away from reaching their third consecutive state championship series in Pearl next week. Game 2 is scheduled for Friday at New Hope High School with first pitch set for 7 p.m., weather permitting.

Oxford (30-5) had to rally for the walk-off win after losing a 4-0 lead after New Hope rallied for three runs in the sixth and one run in the top of the seventh, giving Melendez his moment to shine. Melendez has been an on-again, off-again starter in the Charger lineup all season, filling in when designated hitter Duncan Graeber went down with an injury mid-March, missing most of the regular season. When Graeber returned, Melendez had to relinquish his spot but showed on Thursday how valuable he could still be.

“It’s absolutely nothing against C.J.,” Baughman said of making the switch. “We felt like with (New Hope pitcher Parker Lane), the matchup was better, especially first pitch. … (Melendez) had been in the hardest position of anybody in this dugout. He went from playing to not playing. To playing once again when Duncan got hurt to not playing once Duncan gets back. He has handled it better than any 17-year-old kid I’ve seen in my life. Every day he’s grinding.”

Oxford got on the board quickly with a run in the bottom of the first inning off an error by New Hope left fielder Rye McGlothin to score third baseman Carson Stinnett. Trojan starter Carson Forrester would shut down the potent Charger offense until the fifth inning when Oxford plated three more runs for the four-run cushion.

It seemed four runs would be plenty for Oxford starter Parker Stinnett. The freshman worked out of several jams to keep New Hope (21-13) off the board but ran into trouble in the sixth. After five shutout innings, the Trojans roughed Stinnett up for three runs to shrink Oxford’s lead down to one run heading into the final frame. Stinnett came back out to try and get the final three outs, even with a pitch count above 100. With two outs and a 3-2 count, Sims hit an RBI single to score second baseman Drew Pounders to knot the game at 4-all. Parker was then lifted for his brother, Carson, who finished out the top of the seventh.

“He was at 120-plus pitches. I’ve never done that to a kid and I’m still kicking myself,” Baughman said. “I kept telling myself the pitch count is there for a reason. There’s research done and I still hate getting him that high, but he kept telling me, ‘I’m fine, I’m fine,’ and we needed to have him go as long as we could have him.”