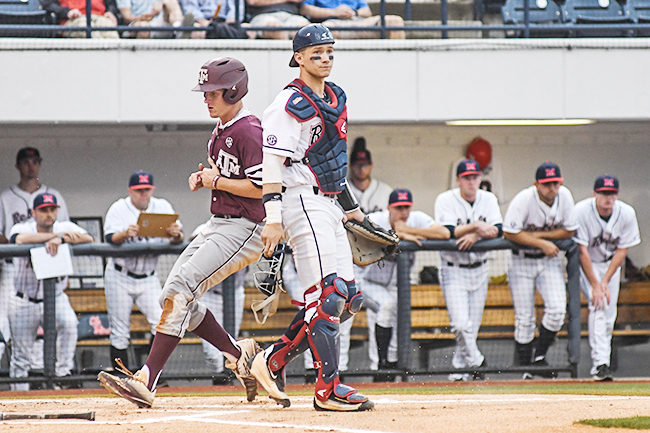 Texas A&M’s Joel Davis (17) scores on a squeeze play as Ole Miss catcher Cooper Johnson (13) watches the throw go to first for the out at Oxford-University Stadium in Oxford, Miss. on Friday, May 12, 2017. Texas A&M won 12-5. (Bruce Newman, Oxford Eagle via AP)

Ole Miss needs wins down the stretch if it’s going to play its way into the NCAA Tournament.

The Rebels never came close to one Friday.

No. 15 Texas A&M’s early onslaught led to another short outing for James McArthur, and the Aggies added on throughout to pull away for a 12-5 win in the teams’ series opener at Swayze Field. Ole Miss will try to snap its four-game losing streak — tied for its longest of the season — when the teams play again Saturday at 6 p.m. on the SEC Network.

Ole Miss (29-21, 11-14 Southeastern Conference) finished with 11 hits and chased A&M ace Brigham Hill with one out in the bottom of the fifth after pushing across four runs against the right-hander, but it was the Aggies (35-15, 15-10) who cashed in on their opportunities far more often with three double plays killing any threat the Rebels made to start a rally after trailing 6-1 through three frames.

A&M pounded out 14 hits with six of them going for extra bases. Braden Shewmake had two of the Aggies’ three home runs and drove in three runs while one of Logan Foster’s three hits went for a homer.

“I thought we had a good approach,” Ole Miss coach Mike Bianco said. “I thought we swung it really, really well. On the mound, we just didn’t give ourselves a chance.”

Will Golsan went 3-for-4 with an RBI for Ole Miss, which fell to three games under .500 in league play with five conference games left. Nick Fortes had two hits and drove in a run while Ryan Olenek, in his first game back after missing the Florida series with a concussion, was 1-for-4.

Three straight singles to start the home half of the fourth loaded the bases for Ole Miss, but the Rebels’ only run came on Tim Rowe’s 4-6-3 double play. Four of the Rebels’ first five hitters reached in the fifth with Grae Kessinger and Golsan hitting RBI doubles to trim the deficit to 7-4, but Ole Miss stranded two more when Fortes chopped into a twin killing.

“We had three different opportunities where scored runs and if we could’ve gotten a better at-bat, but we end up hitting into a double play,” Bianco said. “It’s hard to complain about the offense on a night like tonight when you give up 12 runs.”

The Aggies extended their lead by scoring in each of the last five innings while Kaylor Chafin (7-1) limited Ole Miss to two hits in 3 2/3 innings of relief to get the win. Houston Roth and Andy Pagnozzi combined to allow five runs (three earned) on seven hits over the final four frames in relief of McArthur (3-5), who again struggled from the start.

A&M got to McArthur for three runs on three hits in the first and three more in the third, the big blow in the inning coming on Shewmake’s two-run bomb. Foster took McArthur deep to start the fifth, pushing A&M’s lead to 7-2.

All seven runs were earned against McArthur, who gave up seven hits, walked one and hit a batter while striking out three in five innings. The sophomore right-hander has combined to log just 8 2/3 innings in his last two starts and has given up 14 earned runs during that span, raising his earned run average to 5.29.

“This was different than last week,” Bianco said of McArthur, who lasted just 3 2/3 innings in his previous start against Florida. “Last week it just kind of fell apart on him where he they had a great at-bat, he ended up walking a runner in, ends up giving up a grand slam and kind of fell apart from there. Tonight was just their night. We’ll look back at the tape and try to see more if it’s location or just the pitches. Location-wise I’m sure he missed some pitches, but they were just really, really good tonight.”