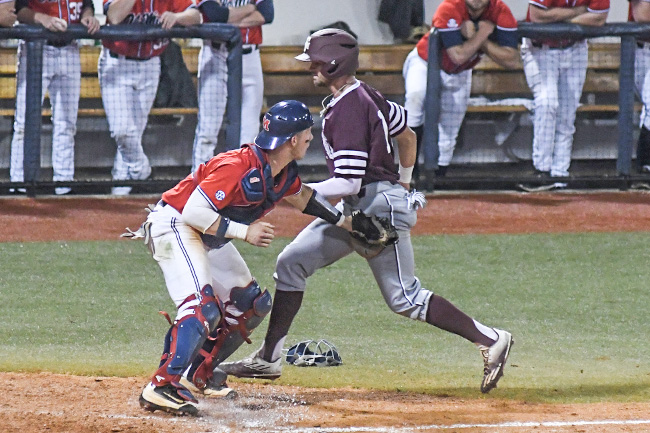 Ole Miss pulled off one of its more important comebacks of the season late Saturday night.

The Rebels plated four runs in the eighth inning to rally for a 6-4 win over No. 15 Texas A&M at Swayze Field that snapped their four-game losing streak and evened the series. The teams will play the rubber game Sunday at noon.

“It was a big win,” freshman shortstop Grae Kessinger said. “Big win for all of us, and it’ll give us momentum for tomorrow.”

Kessinger, who came in hitting .180 for the season, drove in the go-ahead run with a double to the left-center gap after an error allowed the Rebels (30-21, 12-14 Southeastern Conference) to tie the game at 4 earlier in the eighth. Will Golsan provided some insurance with an RBI single two batters later against A&M reliever Cason Sherrod, who combined with John Doxakis (2-3) to allow all four runs (two earned) in the final two innings after Corbin Martin limited the Rebels to four hits over the first six while striking out six.

“Coach (Mike) B(ianco) said just be ready for the fastball,” said Kessinger, who reached base three times and scored a run. “I really tried to do that. … I just stayed aggressive and it all worked out.”

The win got the Rebels within two games of .500 in SEC play with four league games remaining before the SEC Tournament as Ole Miss tries to improve its NCAA Tournament resume. Ole Miss began the day with an RPI of 37.

“Games like this, they can turn everything around in a heartbeat,” Kessinger said. “Baseball’s a great game for that reason. You can struggle a little bit and then come out and play a great game.”

Ryan Rolison walked three, allowed four hits and struck out five, failing to get through five innings for the second straight start. The freshman left-hander worked out of a couple jams to limit A&M’s damage before leaving with two outs in the fifth after Walker Pennington’s two-run single gave the Aggies a 3-1 lead.

Will Stokes came on and stranded a pair to keep the Aggies (35-16, 15-11) from adding on while combining with fellow reliever Will Ethridge (2-2) to keep the Rebels close. The two combined to hold A&M to one run on four hits and struck out six in 3 1/3 innings as A&M went just 2 of 13 with runners in scoring position.

“It was a tough night for (Rolison), but he hung in there and gets us to the fifth” Bianco said. “Stokes was terrific and gets a big strikeout that gets us off the field. Those are things you forget in the game.”

Dallas Woolfolk retired three of the four batters he faced in the ninth for his 11th save. Tate Blackman and Nick Fortes each added two hits and an RBI for Ole Miss.