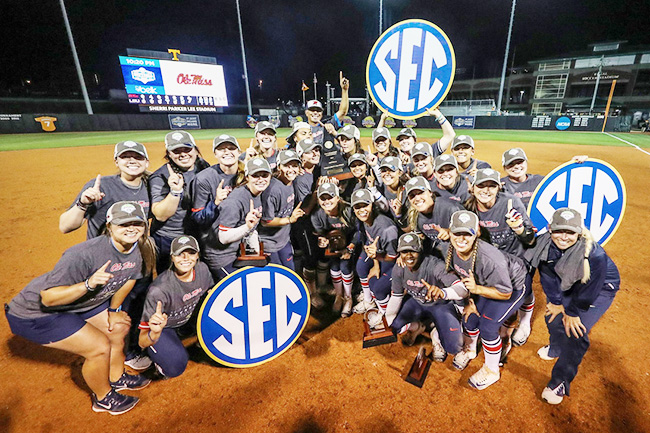 Ole Miss’ softball team has gone from the bottom to the top in the Southeastern Conference.

The Rebels (40-18) defeated Alabama earlier in the day to reach the final.

“It was our chance to shock the world,” pitcher Kaitlin Lee said in an interview with the SEC Network.

The tournament title comes three years after head coach Mike Smith took over an Ole Miss program that finished with the worst record in the SEC. The win over LSU (41-18) was Ole Miss’ 40th victory, giving the Rebels back-to-back 40-win seasons for the first time in program history.

Ole Miss, which has 11 top-25 RPI wins after also beating Mississippi State and No. 1 Florida in the tournament, will wait and see if it will be selected as a regional host in the NCAA Tournament when the tournament field is announced Sunday at 9 p.m. on ESPN2.

Lee was once again the catalyst for the Rebels in the circle, hurling her fourth complete game in as many games. In her first year at Ole Miss after transferring from Mississippi Gulf Coast Community College, the right-hander scattered five hits, struck out two and didn’t issue a walk on her way to earning tournament MVP honors.

The 5-foot-6 Lee, who retired 12 of the last 13 batters she faced after LSU scored its lone run in the fourth, allowed just three runs on 18 hits with 12 strikeouts and one walk in 28 tournament innings, throwing 440 pitches before it was over.

“What can you say about Kaitlin Lee and what she was able to do in this tournament?” Smith said. “I don’t know if anything’s been done in a long time like that with the number of pitches. Unbelievable.”

The Rebels gave Lee a quick lead to work with with when Elantra Cox’s two-run double and Kylan Becker’s two-run single put Ole Miss up 4-0 in the second. An error allowed the Rebels to add a run in the seventh.