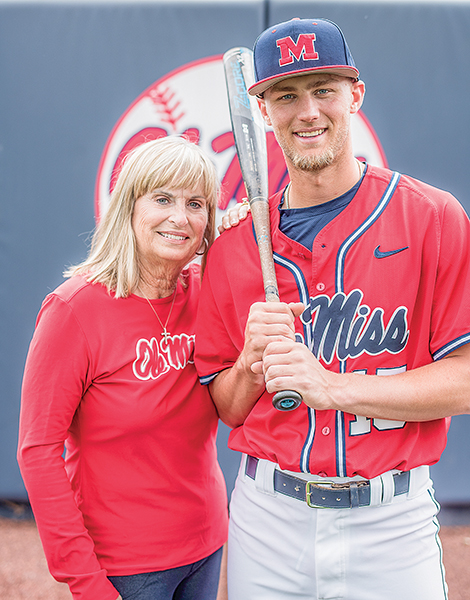 EDITOR’S NOTE: This full article appears in the May issue of Oxford Magazine and can viewed at www.oxfordmag.com.

Carolyn Kessinger wears a lot of hats—real estate broker, attorney, baseball fan and pickleball player, to name a few. But it is her longtime role as a wife, mother and grandmother that she considers the most meaningful of her life.

A self-proclaimed small-town girl who grew up in Forrest City, Arkansas, Carolyn married her husband, former Ole Miss and Chicago Cubs shortstop Don Kessinger, when she was 18 years old.

The couple moved to Chicago and Carolyn soon realized she had a lot to catch up on.

“I thought I knew about baseball, but truthfully I knew about three strikes and four balls,” she says. “These women started talking about ERAs and power percentages, and I thought, ‘What?’”

Two years later, just as she had begun to grow used to the nuances of the game, she and Don welcomed their first son, Keith.

For the first three weeks of Keith’s life, Carolyn stayed with her parents, leaning on her mother to learn the ropes with Don’s spring training fast approaching.

Shortly after, Carolyn boarded a plane to Arizona with a newborn in tow. “We had a little efficiency apartment and the only way I could warm bottles was on a plate warmer,” she says. “And you know what? I came back a professional.”

When Keith was two years old, the Kessingers bought a house in Chicago and were soon expecting their second child—a son, Kevin.

“Can I tell you the look on Keith’s face when we brought this baby out—the first thing he said was, ‘He can’t play ball with me!’”

Carolyn admits she’s been stunned over the years when people would ask how she “convinced” her children to like baseball.

Keith and Kevin were immersed in baseball living in Chicago, attending almost all of their dad’s home games and several away games.

“It would have been a terrible life if I hadn’t been married to the love of my life,” she says. “But we had a storied journey.”

With Don on the road for half the season, Carolyn focused on trying to give her boys as much normalcy as possible as they got older and started playing sports, understandably worried about the pressure of growing up with the Kessinger name in Chicago.

After Don retired from professional baseball, the family returned to the South, settling in Memphis where Keith and Kevin played baseball together in high school and later at Ole Miss, both playing under Don, who became head baseball coach in 1990.

Carolyn was as busy as ever, earning degrees in math and science from the University of Memphis (then Memphis State). Law school soon followed, with Carolyn still determined to watch her boys play, even if it meant having a book in her lap so she could study during games.

The daily commute from Oxford to Memphis eventually got old for Carolyn. “I just decided I’d come down here and hang my own shingle and I did,” she says, having practiced law in Oxford from 1992 to 1997.

It was during this time her motherhood journey came full circle after Carolyn’s father died and her mom moved in shortly after. She had always helped her with everything, Carolyn says, from running for class president to helping her set up her apartment when she left home to traveling to baseball games. It was natural for Carolyn to return the favor, especially with their shared love of sports.

“She was such a sports lady,” Carolyn says. “Girls back in my day didn’t play. It was unladylike to play sports. I felt so cheated. My brothers got to play and I didn’t, and I was better than they were.”

Even in the last years of her life, Carolyn’s mother didn’t think twice about traveling to baseball games with the family, her daughter occasionally putting a hand on her leg to calm her nerves or tell her not to be so hard on an umpire.

“My parents were very Godly parents and raised four good children,” she says. “Their legacy goes on through my children and my grandchildren.”

For all its joy, motherhood comes with plenty of disappointment along the way. For Carolyn, her sons’ letdowns were also hers, as was the case when Keith—drafted out of college by the Baltimore Orioles before landing a spot with the Cincinnati Reds—decided it was time to walk away from his dream of playing major league baseball.

“It was such a hard decision for him, and we knew it was,” Carolyn says. “…for him to have this realization that he wasn’t going to get there and have him make that decision was very hard for me as a mom.”

Disappointment struck once again when Kevin suffered a back injury his senior year at Ole Miss. Playing for his father with the team aiming for a regional playoff, Kevin played through the pain, which tortured Carolyn.

“I was ready to go to the field, to the dugout, to get his dad by his collar and say, ‘Do not play my child again,’” she says. Kevin signed with the Cubs but was never able to play due to his injury.

“At some point, whether or not you get to the pinnacle of success in your chosen profession, it’s over,” Carolyn says. “My saddest moments were what I consider to be their greatest disappointments. Just from a mom standpoint, you want them to get to do their dreams.”

Now that her children are grown with children of their own, Carolyn has come to experience the joys of being a grandmother to a new clan of Kessingers: Josh, 22; Anna Kathryn, a junior at Ole Miss; Grae, a freshman shortstop at Ole MIss; and Chase, a senior at Oxford High School.

Staying true to form, Carolyn is involved with all of her grandchildren’s activities, from hunting to shopping—and of course, baseball.

Carolyn and Don attend as many of Grae and Chase’s baseball games as possible, traveling to away games when they can.

“They seem so young to me,” she says. “There’s still expectation with that name on their back.”

Don, now marking 52 years of marriage to Carolyn, embraces how lucky he’s been, how lucky they all are to have her at the helm of the family’s cheering section—on and off the field.

“I’m so blessed to have her along this journey with me,” he says. “She’s been the most wonderful wife, mother and grandmother in the world.”