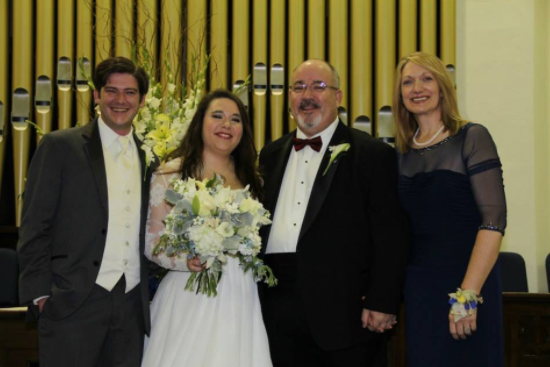 Sid Salter (third from left) has been diagnosed with lymphoma. His family (including daughter and wife in this photo) has asked for prayers, though he is said to be doing well and in good spirits. (twitter)

Sid Salter, a longtime syndicated columnist in Mississippi and the Chief Communications Officer and Director of the Office of Public Affairs at Mississippi State University, has been diagnosed with lymphoma and is undergoing chemotherapy.

Salter plans to take an indefinite leave from writing the column, according to a family member.

“Sid was diagnosed yesterday in Tupelo with lymphoma. He started chemo treatments last night at NMMC. This type of lymphoma is very aggressive and it was important to start treatments now.
Those of you who know my husband know he is a fighter. He is in good spirits and joking with the medical staff. Our friends and family are embracing us. We ask your prayers as we begin this journey.
He plans to take an indefinite leave of absence from his column while undergoing these treatments. Sid said to thank all of you for your friendships.
Leilani Salter”
Salter’s son-in-law, Nathan Gregory, asked for prayers on Twitter.
“Yesterday we learned my father-in-law has lymphoma. I ask for prayers for him, my wife Kate, and my mother-in-law Leilani. Thank you.”
Former Ole Miss Chancellor Dan Jones was diangosed with lymphoma in 2014 and underwent treatment. He now works at the University Medical Center in Jackson.

At Mississippi State, Salter leads a team of marketing and communications professionals in producing print, broadcast, and new media content designed to advance MSU’s reputation as a nationally prominent research university. Salter is also the university’s spokesman and the administrator of both the University Television Center and campus radio station WMSV-FM.

MSU’s 2004 National Alumnus of the Year, Salter has enjoyed a unique career as an award-winning journalist, political columnist, television commentator, talk radio host, author, educator, and university administrator. He was a John C. Stennis Scholar in Political Science as a student at MSU.

The Washington Post has listed him as “one of the nation’s best state political reporters.” He is a member of the Miss. Press Association’s Hall of Fame. His syndicated political columns have been published continuously in Mississippi and a number of national newspapers since 1983.

He formerly served as MSU’s first journalist-in-residence at the MSU Libraries and was the inaugural holder of the Kelly Gene Cook Chair in Journalism at the University of Mississippi, where he served on the Journalism faculty in the 1990s.

Salter and his wife, Leilani, are the parents of four grown children and have five grandchildren. They are members of Starkville’s First United Methodist Church.