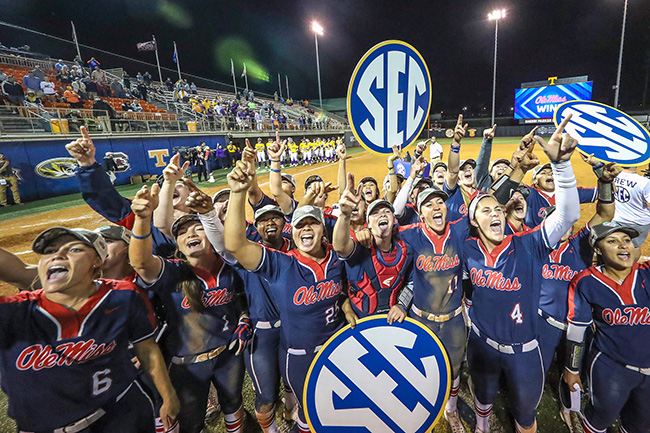 Now, Ole Miss is in the conversation for hosting an NCAA Regional.

All week the Rebels (40-18) showed up and showed out with a fun and exciting style of play, and it all culminated Saturday night on Rocky Top when the Rebels hoisted the trophy. As the week progressed through the first round, all the way to the championship, Ole Miss won over the hearts of not only fans in Tennessee, but across the country.

This team of destiny made history time and time again, knocking off Mississippi State in the opening round, taking down No. 1 Florida in the quarterfinals, a game no one gave the Rebels a chance to win, before going on to beat No. 15 Alabama Saturday morning for the third time this year, then a few hours later complete the four-game sweep over the Tigers.

In Saturday’s finale, the Rebels used the same approach they had all week, putting pressure on the defense and relying on the arm of the SEC Tournament MVP, Kaitlin Lee. Ole Miss tacked on 12 hits against three different LSU (41-18) pitchers, and the slappers in the lineup yet again applied the pressure they needed, totaling seven of the 12 hits to spark the offense.

Lee, who threw every single pitch for the Rebels in four games, closed out her dominating week with one of the most impressive tournament performances in recent history. She worked her fourth complete game of the week, and allowed only one earned run off just five hits. The JUCO transfer, in her first Division I season, capped off the week with just three runs allowed, 19 hits, 12 strikeouts, only one walk, and one shutout in 28 innings.

Her offense helped her out vs. the Tigers scattering six hits against the starter Sydney Smith, before she was pulled in the second after earning three runs. Carley Hoover came in to pitch five frames and allowed two runs, one earned, while Allie Walljasper closed it out for the final two thirds of an inning.

The Rebels threatened early in the first putting two runners on, but Smith got out of the jam to keep the Rebels off the board. LSU came back in its home half with a leadoff single and steal, but Lee and her defense retired the side to keep it a 0-0 game.

But, in the second, Ole Miss turned it up with six hits and four runs. Courtney Syrett got the 1-out rally started off a hard single back up the middle, before Paige McKinney reached on an infield single to short. Senior Dakota Matiko – who was supposed to graduate this morning along with fellow seniors Syrett, Raven Campos and Strother – stepped in and reached out for a single through the left side to load the bases. LSU then turned to Hoover, before Cox dropped a single in front of a diving left fielder, scoring Bry Castro and McKinney. Becker then stepped in and ripped a 2-RBI single to center, scoring both Matiko and Cox, extending the lead to 4-0. From there, Ashton Lampton just missed a 2-run home run by inches, before Dylinn Stancil roped a line drive, but it was right at the third baseman to end the frame.

Past that, Lee and her defense worked inning-by-inning to escape a couple jams, including in the fourth after back-to-back singles to begin the frame, before a sac bunt and infield grounder scored one to cut it to 4-1. But, Lee got a popup on the infield to end that inning keeping the score 4-1.

The Rebels went on to add an insurance run in the seventh when Stancil reached on an error to score Becker, extending the lead and final score to 5-1.

Cox, Becker, Lampton and McKinney all tallied two hits for the Rebels, while Cox and Becker had the two RBI from the top of the order.