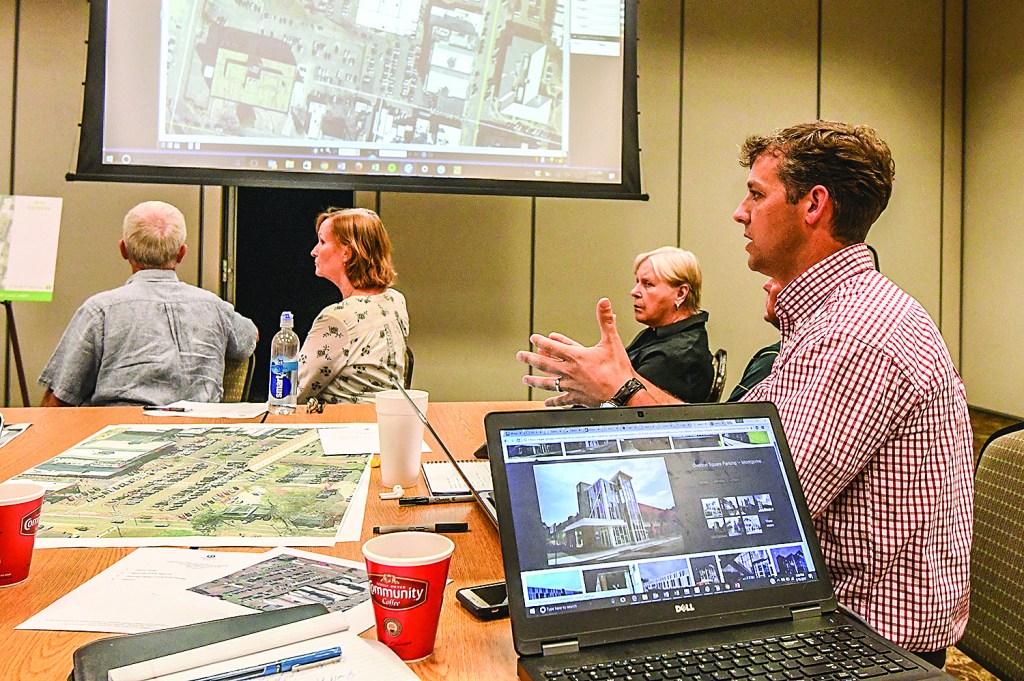 Parking garage meeting, at the Oxford Conference Center in Oxford, Miss. on Monday, May 15, 2017.

A parking garage should look like a parking garage; however, that doesn’t mean it has to be ugly, according to Jim Eley with the Eley Guild Hardy architectural firm.

Hardy and other representatives from the design team recently hired by the city of Oxford to design Oxford’s first public downtown parking garage met with citizens Monday evening at the Oxford Conference Center to gain input on what the public wants to see in the new garage.

The firm held design charrettes throughout the day with city staff and commissions before the public hearing, which began at 5 p.m.

Eley told the small group who attended the public meeting that the garage shouldn’t appear to be something it isn’t — a house or historic buildings on the Square.

“But it can be designed to fit in with the size and mass of the buildings around it and also be an attractive design,” he said.

Eley said the design team is first considering whether the garage should be two- or three-bays wide and whether three- or four-stories high. However, even at four stories, it will still be the height of a three-story building as garages don’t require high ceilings.

“Once we know the exact footprint we’re going with, then the other details of the design will follow,” Eley said. “There’s pros and cons to both, the two or three bay.”

Tom Sharpe, chairman of the Downtown Parking Advisory Commission said the city plans on widening Jefferson Avenue to add a turning lane to help with the traffic flow on and off the busy street.

One resident inquired about delivery trucks that currently park behind Oxford Square North where the garage will be constructed and whether they will still be able to fit back there to avoid trucks from parking on North Lamar.

Taylor Guild, with Eley Guild Hardy said there will be enough room for trucks to deliver to the shops and for emergency vehicles to get through if needed.

Eley said the design team will begin working on the design and will present possible drawings for review by the city staff, DPAC and the public this summer.