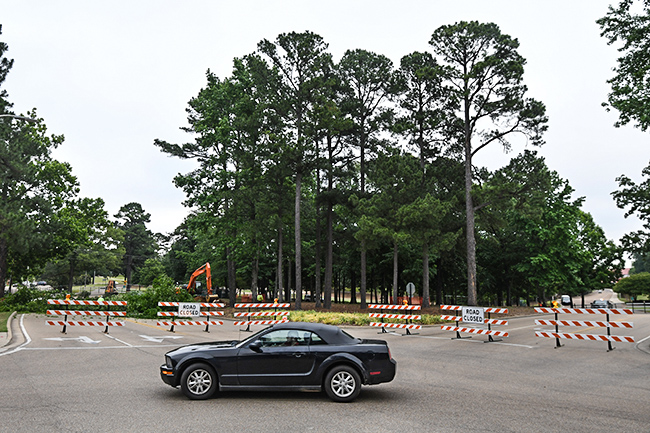 Construction of the roundabout where Hill Drive and Hathorn Road meet Chucky Mullins got underway in Oxford, Miss. on Thursday, May 18, 2017.

Roundabout construction will begin Thursday, May 18 where Hill Drive and Hathorn Road meet.

The University of Mississippi campus entrance at Chucky Mullins Drive will close Thursday (May 18) so a roundabout can be built where Hill Drive and Hathorn Road meet.

The work there to install a roundabout will lead to improved traffic flow on the south side of campus, but until the work is complete in August, the entrance will be closed. Drivers will need to use other entrances to campus in the meantime.

“The four-way stop at Chucky Mullins Drive, Hill Drive and Hathorn Road has seen increasing congestion over the past few years,” said Ian Banner, director of facilities planner and university architect. “The new roundabout will allow traffic to flow more freely at this intersection.”

The Ole Miss softball team will host an NCAA regional tournament beginning Friday. Large crowds are expected for the event, which will be held in the Ole Miss Softball Complex near Chucky Mullins Drive and the site of the planned roundabout, said Travis Wells, UM athletics event management coordinator.

“It will be easier for fans to get to Insight Park (for parking) by entering campus from Jackson Avenue than from Highway 6,” Wells said. “We expect a big crowd, so we are asking (fans) to please be mindful of that when driving in front of the stadium.”

UM police chief Tim Potts encourages carpooling and also advises using parking on the outskirts of campus, especially along Old Taylor Road, this summer while the work is ongoing.

“People should expect delays if they are going to try to utilize Gertrude C. Ford Boulevard or Manning Way,” Potts said. “They should also expect delays if exiting campus using that intersection.

“A left turn from Manning Way onto Gertrude Ford is going to be very difficult, if not dangerous. If that intersection must be used, allow yourself extra time.”

The best bet for those who need to leave campus and make a left turn onto Gertrude Ford Boulevard is to make a right instead and drive around the roundabout at Old Taylor Road to head back northbound, Potts said. This is a faster, safer alternative, he said.