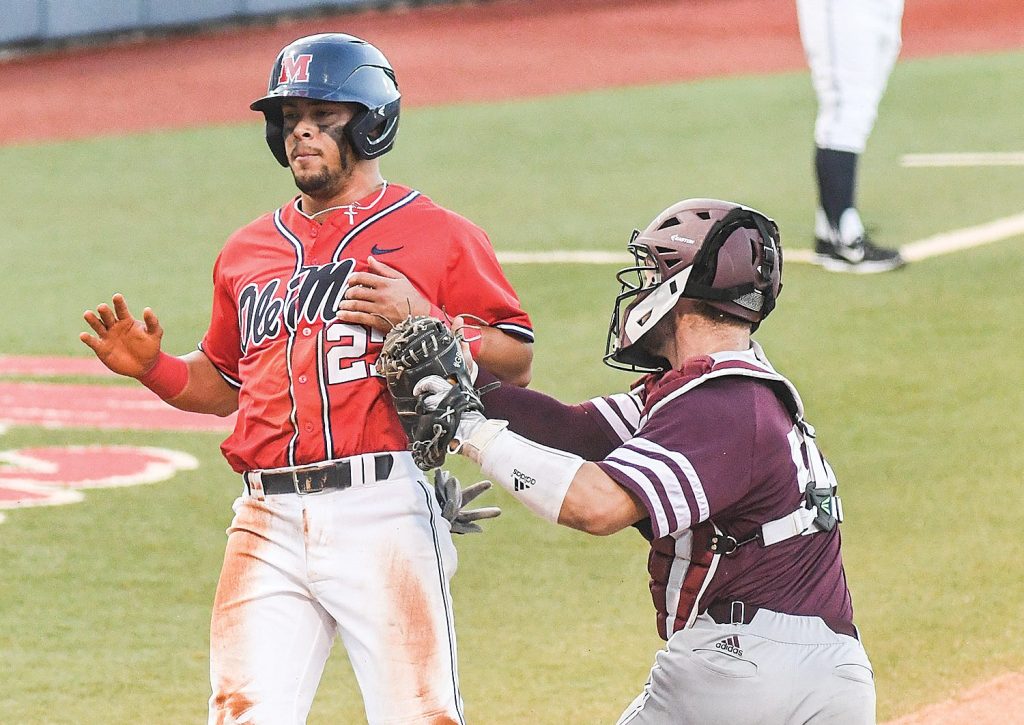 Ole Miss’ postseason hopes are coming down to the wire.

The Rebels will wrap up the regular season with a series at Auburn that will be critical to their NCAA Tournament at-large chances. With the Southeastern Conference Tournament set to begin Tuesday, every series around the league will start tonight with first pitch between the Rebels and Tigers set for 6.

Ole Miss (31-22, 13-14 SEC) helped its cause with a series win over then-No. 15 Texas A&M last weekend, but the Rebels stumbled in a 5-0 midweek loss at Arkansas State on Tuesday that put another sub-100 RPI blemish on a bubbly postseason resume.

The Rebels begin the final weekend sixth in the SEC West standings as just one of two teams in the division with a sub.-500 record in league play. Players are trying to keep things as normal as possible even if the circumstances are anything but.

“You’ve got to stay away from standings,” freshman catcher Cooper Johnson said. “That just messes with your head, so we’re just taking it game by game.”

The Rebels have their strength of schedule (No. 11 nationally) and quality wins (10 against the RPI top 50, eight against the RPI top 25) going for them, but series wins over preseason top-25 teams East Carolina (86 RPI) and UNC-Wilmington (144) aren’t carrying as much weight as Ole Miss hoped they would with those teams a combined three games over .500. Losses to Arkansas State (184) and Georgia State (218) aren’t helping either.

As for Ole Miss’ losing record against SEC competition, seven teams in the last five years have finished that way and made the NCAA field, but all of them, including a 14-16 Ole Miss team in 2012, had top-30 RPIs. Kentucky in 2015 and Georgia in 2012 were left out after going 14-15 during the regular season with RPIs of 46 and 51, respectively.

If recent history is any indication, two wins over Auburn may be enough for the Rebels, who fell to No. 34 in the RPI after Tuesday’s loss. A series loss will likely leave Ole Miss with work to do in the SEC Tournament.

Baseball America has the Rebels as a 3 seed in the Long Beach (California) Regional in its latest NCAA projections released Wednesday. D1Baseball.com also projects Ole Miss as a 3 seed headed to the Chapel Hill (North Carolina) Regional.

“Just try to stay in the moment,” Ole Miss coach Mike Bianco said. “There’s so many regional projections and that type of stuff. I think the best thing to do is to control what you can control, and that’s just try to play as well as you can in your game. The good news about our league is it rewards the teams that play well.”

Ranked in the top 10 nationally a few weeks ago, Auburn (32-21, 14-13) has lost seven straight, though the Tigers are 21-12 at Plainsman Park with series wins over Florida, Arkansas and South Carolina. It caps a stretch of three road trips in four weekends for Ole Miss, which took two of three from Arkansas and was swept by Florida in its last two series away from Swayze Field.