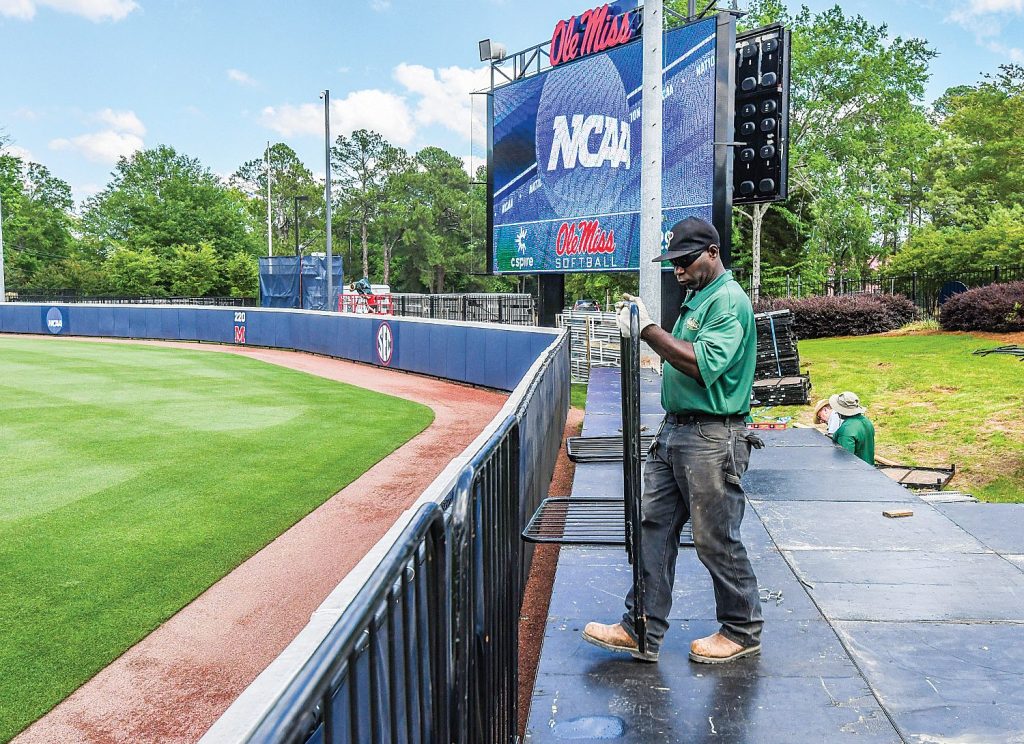 Michael Carothers is one of a work crew setting up temporary stands at the Ole Miss Softball Complex in preparation for the NCAA Oxford Regional, in Oxford, Miss. on Wednesday, May 17, 2017.

Forgive Travis Wells if he’s not sure what day of the week it is.

Wells, Ole Miss’ game operations coordinator for softball, has been busier than usual getting the Ole Miss Softball Complex ready to host the program’s first-ever NCAA Tournament regional. Wells is in charge of making the facility as accommodating as possible, and there’s plenty of work to do before the games start Friday.

“It’s been a whirlwind,” Wells said. “It’s been going really, really fast, but we’ve got a good crew so it’s nothing we can’t handle. It’s been a lot of communication, a lot of phone calls, a lot of teamwork.”

That crew, Wells said, consists of about 35 workers who are responsible for tasks ranging from making sure the scoreboard is functioning properly to maximizing the complex’s limited space in anticipation of the largest crowds the facility has ever drawn.

Tickets sold out less than 48 hours after Ole Miss was announced as a host site late Sunday night. With the 1,611 tickets sold far exceeding the complex’s 1,000-seat capacity, temporary bleachers are being installed in the outfield, including elevated bleachers behind the right-field wall that will add approximately 500 seats, Wells said.

The field will also be visible from bleachers across the street from the complex that will serve as an overflow section. Wells said that could push capacity to 1,700 or beyond.

“You’ve got to think outside the box and be creative,” Wells said. “You can’t do your standard operation when you’re going to have this many people.”

Moving that many people around a smaller venue is also a top priority. Wells said extra security is being brought in “not because something might happen but because people just don’t know where they’re going. They’re not familiar with the facility, and some of them have never even been to a softball game.”

Ole Miss is doubling the number of restrooms in the outfield and placing portable restrooms in the parking lot. More concessions will be added throughout the facility in an effort to keep things flowing.

“Really it’s providing a great experience for the fans and the student-athletes in a tight space,” said Lynnette Johnson, Ole Miss’ administrator for softball. “That’s the fun part. You want to feel the electricity. The kids want to feel the electricity, but we want to be able to move them to and from our indoor (facility). And with TV and parking, it’s just going to be a tight space with a lot of people, but we’ll get it done.”

Johnson, the school’s senior woman administrator for the last 14 years, has been anticipating postseason softball in Oxford for a while.

The school has been placing bids to host for more than a decade, Johnson said, which included years in which Ole Miss was among the worst teams in the Southeastern Conference. The Rebels bid again in April, and that persistence paid off with Ole Miss (40-18) earning the No. 12 national seed following its first-ever SEC Tournament championship under third-year coach Mike Smith.

“People don’t understand if you don’t put in a bid and prepare to be successful, you’re not hosting,” Johnson said. “That’s the first thing. We had to hold hotel rooms back in the summer just like for baseball. We have to prepare our community because we’re so small for hosting the event.”

Ole Miss hosted the SEC softball tournament in 2011, which has helped serve as a reference point for Johnson and Wells as far as what all needs to be done. Wells said he expects the bulk of the prep work to be completed today so that the crew can have Friday morning to tie up any loose ends before Arizona State and North Carolina open the regional at 6 p.m.

“There’s a lot of unknowns because you’ve never done this before for softball, and it’s hard to know specifically what to be anxious or nervous about because we’ve never done it,” Wells said. “There’s just kind of an open-ended feeling where you feel like everything’s going well and you feel like you have a great plan, but there’s always something that pops up that you’ve got to kind of handle on the fly.”

As for the amount of money the school has budgeted to put on the regional, neither Johnson nor Wells could provide exact numbers. Not that anyone at Ole Miss is putting a price on history.

“If we blow the budget, that’s fine,” Johnson said. “We’re going to do what we need to do to put on a great event and manage it. That’s not going to be a problem.”