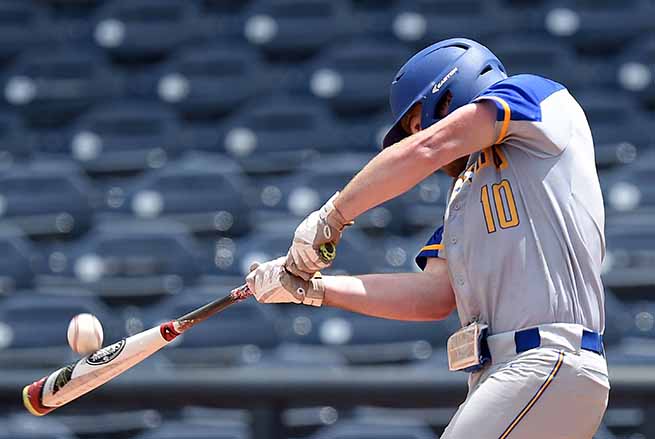 Oxford's Duncan Graeber hits against Pearl River on Friday, May 19, 2017, in the MHSAA State Baseball Championships at Trustmark Park in Pearl, Miss.

PEARL — The two-time defending 5A state champions have a pulse. After blowing a two-run lead, giving up six runs in the seventh inning on Tuesday, Oxford’s backs were against the wall in Friday’s elimination game against Pearl River Central and came out swinging. The Chargers tallied nine runs off eight hits in their 9-2 win over the Blue Devils at Trustmark Park.

The win sets up a winner-take-all Game 3 at 7 p.m. on Saturday night, weather permitting.

Oxford (32-6) had a chance to break the game open early, loading the bases with only one out in the top of the first inning, but could not cash in on the opportunity. After scoring only one run in the next two innings, the Chargers scored four runs in the fourth inning, two in the fifth and two in the sixth.

Designated hitter Duncan Graeber went 2-for-4 with an run batted in while Preston Perkins continued to stay hot in the series, going 2-for-2 with an RBI and a walk. Shortstop Drew Bianco went 1-for-3 with 2 RBIs off a long single to the right field wall in the fourth inning. First baseman Ben Bianco and second baseman Sam Bianco and pitcher Parker Stinnett also recorded hits.

“I thought we pressed in a big ballpark (on Tuesday),” Baughman said of his offense. “We went out to Swayze (Field) Wednesday and hit and saw that not all of us could put it in the trees like we could at our place. I still thought in the first couple of innings we swung it a little tentatively. I thought we were letting the moment get too big for us at the plate. Then we settled in.”

Pearl River Central (27-12) were in their first championship-clinching game in program history and appeared to be cracking under the pressure. The Blue Devils committed three errors, including two in the first inning. Starting pitcher Hayden LaBeau had an up and down outing, lasting 3 1/3 innings and giving up five runs, two earned, off three hits. LaBeau also gave up three walks and struck out five.

“In high school baseball, that happens once in a while,” Pearl River Central coach Neil Walther said. “What we can’t do is let it affect us at the plate. I felt like we had our chins in our chest a little bit and feeling bad for ourselves. That can’t happen. If we change that, we ought to be all right for (Saturday).”

The Oxford bullpen got what they needed on Friday, rest, as Stinnett pitched a complete game. The junior gave up the two runs off six hits while striking out seven and walking one Pearl River batter.

“Absolutely gutsy,” Baughman said of Stinnett’s outing. “As a coaching staff, we felt he had the best stuff all year. He’s a battler. He’s a competitor. Real proud of him and he’s been huge for him all year.”

Something will have to give as Pearl River Central is 9-0 all-time in Game 3s.