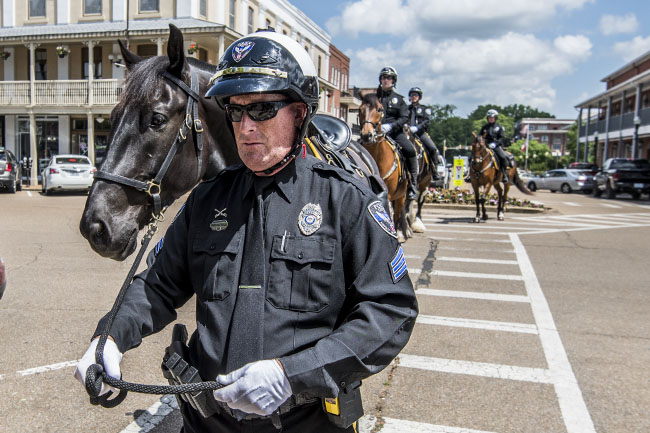 A stunning black horse slowly walked across the road to stand before the Lafayette Count Courthouse while dozens of local citizens and law enforcement officers stood by quietly.

The horse had no rider. Empty boots sat backward in its stirrups.

A custom that dates back to the time of Genghis Khan, the horse represented those officers in the last year who would “ride no more,” after giving their lives in the line of duty.

The annual Peace Officer Memorial Service was held Thursday on the northern lawn of the Lafayette County Courthouse. Each year, officers from local, state and federal offices gather with citizens to remember those police officers and K9s who died in the past year.

While there were no officers killed in the line of duty in Mississippi in the past 12 months, the nation has lost 161 officers.

Representatives from the Oxford Police Department, Lafayette County Sheriff’s Department, Mississippi Highway Patrol, the University Police Department and Mississippi Wildlife, Fisheries and Parks all announced they had not lost officers in the past year. A representative from the U.S Marshals Service, however, announced their department had lost six officers including one K9 in other states across the nation.

OPD Police Chief Joey East asked the crowd for a moment of silence in honor of 6-year-old Kingston Frazier, who was shot and killed during a carjacking in Jackson earlier Thursday morning.

Guest speaker U.S. Attorney Bob Norman said the day was not only to honor those who gave the ultimate sacrifice but to celebrate the lives of all law enforcement officers who work each day to keep the city, county, state and nation safe and free from anarchy.

“He has passed along the perfect example of what it means to be an honorable lawman,” Norman said.

Norman told the attending officers that it’s easy for police officers to end up a bitter, old and jaded — feeling at the end of their watch that their lifetime of service was unappreciated. He offered them tips to abide by as they continue to service their hometowns, their state and their nation.

“Get and keep friends outside of law enforcement to keep perspective,” he said. “Keep a sense of humor. Never take shortcuts or compromise who you are. Value your honor, your badge and time in your uniform. Value the people you service with and tell them so. Value your family and they are making sacrifices too. Know that the majority of people do appreciate what you do but they won’t get around to telling you so. In the end, that doesn’t matter. In the end, when you’re old and looking back to your career, you will have the satisfaction of know you’ve done your best and that you served with courage and resolve and integrity.”

Mayor Pat Patterson and Lafayette County Board of Supervisors President Jeff Busby welcomed those attending the service and thanked all the law enforcement officers for their service. The OPD Honor Guard performed a 21-gun salute.