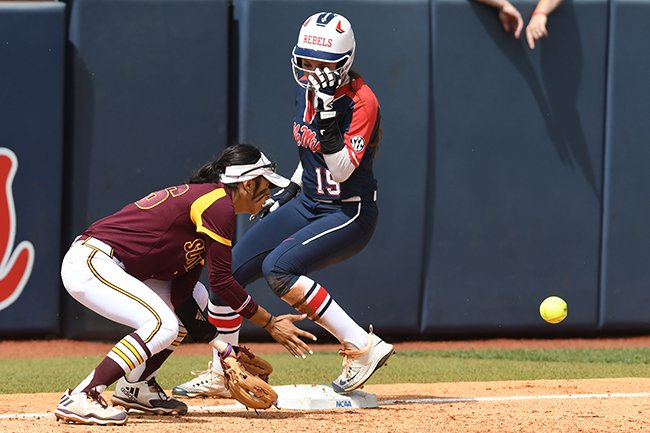 Ole Miss softball will play for its second championship in as many weeks.

A late offensive surge backed yet another strong outing from Kaitlin Lee, and the Rebels held off Arizona State for a 2-0 win Saturday at the Ole Miss Softball Complex that put them in the Oxford Regional finals.

Eight days after its upset run to the Southeastern Conference Tournament championship, Ole Miss will face North Carolina, the only team it’s yet to play in the tournament, for the regional championship Sunday at 1:30 p.m. It’s the second straight appearance in a regional championship for the Rebels, who came out of the losers’ bracket last season before being bounced by reigning national champion Oklahoma.

As the only unbeaten team left in this year’s double-elimination regional, Ole Miss (42-18) will have two chances if needed at one win that would send the Rebels to their first-ever super regional. An if-necessary game would be played at approximately 4 Sunday afternoon.

“It’s wonderful to go in and think that tomorrow we could just play one game and be done with it for a week,” Lee said.

The Rebels had to work for their latest one with Lee and Arizona State’s Dale Ryndak locked in a scoreless duel until the bottom of the sixth. Elantra Cox led off the home half of the frame with a triple to deep right and scored on another triple from Kylan Becker, her sixth RBI of the tournament.

“I was looking for something I could drive,” Cox said. “Wanted to help the team get going.”

Ole Miss had just three hits against Ryndak through the first five frames but matched that total in its final at-bat when Miranda Strother plated Becker with a double for the two-run lead. Cox (3-for-3) and Becker (2-for-3), the first two hitters in the Rebels’ lineup, accounted for all but one of Ole Miss’ hits and are a combined 9-for-12 in the tournament.

“There’s a reason they’re at the top of our lineup,” Smith said. “Our offense goes as they go.”

It proved to be enough for Lee (22-10), who held an Arizona State team that hit four home runs in its win over North Carolina on Friday to just three singles. But the junior right-hander made sure to give her defense its props in helping keep the Sun Devils off the board.

Arizona State threatened in the fourth when a leadoff walk and a single put two runners on, but third baseman Ashton Lampton jumped to snag Fa Leilua’s liner and doubled off Chelsea Gonzales at second before Lee got a groundout to end the inning. Sashel Palacios sent a hit to the left-center gap to start the seventh, but Strother quickly corralled the ball and fired it in to cut Palacios down trying to stretch it to a double.

“I work with the outfielders just going to the wall, making sure you get in good position and make a good throw,” Smith said. “(Strother) knew exactly what she needed to do. Sometimes you spend all year for the one opportunity, and she came through for it. Can’t say enough about our defense today.”

Said Lee, “They always seem to have my back at the most important times, and I love that about them.”

“I always stay true to myself,” Lee said. “We attack everybody similar. We go to my strong points, and it seems to work for us pretty well.”