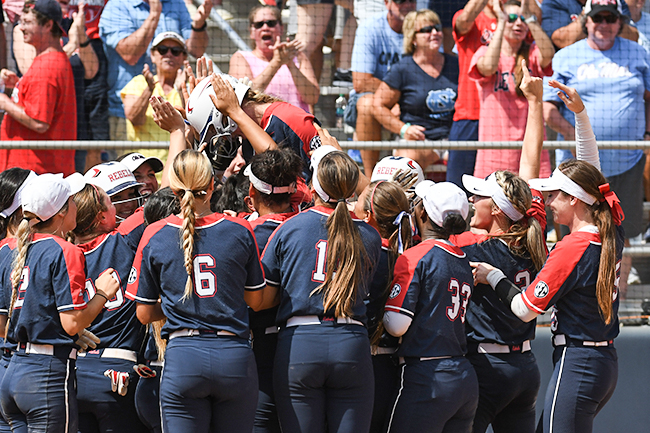 Mike Smith has no problem likening his team’s improbable postseason run to the fairy tale of Cinderella.

Ole Miss finished a dominant three-day showing with a 7-2 win over North Carolina to win the Oxford Regional championship Sunday at the Ole Miss Softball Complex, earning its first-ever super regional berth. The Rebels (43-18) will head west to take on No. 5 national seed UCLA, a 9-1 winner over Cal State-Fullerton in the Los Angeles Regional final, in the best-of-three super regional next weekend.

One of the last 16 teams playing, Ole Miss is two more wins away from advancing to the Women’s College World Series just three years after Smith took over a program that had the worst record in the Southeastern Conference.

“We’re just two games away from playing in Oklahoma City,” Smith said, referencing the annual site of the WCWS. “Who would’ve thought three years ago that this is where we’d be?

“We’re the Cinderella story. We’re going to be wearing the glass slipper.”

Ole Miss, which stretched its winning streak to seven games, scored the last seven runs after facing its only deficit of the tournament after two innings. The Rebels tied it with two runs in the fourth before designated player Brittany Finney provided the go-ahead blow with a two-run homer deep over the left-field wall in the sixth.

“I was just looking for a pitch to hit, so honestly I just swung at a strike,” Finney said. “It was an inside pitch, and I just took the most of it.”

Finney, who transferred from Oklahoma after playing in just 12 games for the defending national champions last season, admitted she had some nerves playing in her first tournament game in place of the struggling Dylinn Stancil, but the lineup change paid off as Finney had two of Ole Miss’ 14 hits against UNC’s Brittany Pickett (22-10) and finished with three RBIs.

“She was at Oklahoma, so she knows what it’s like to play on this stage,” Smith said. “She says she was nervous? I couldn’t tell. She’s got nerves of steel. I’m so happy for her.”

Elantra Cox had three singles, her second straight 3-for-3 day, and finished the tournament 8-for-9 from the leadoff spot while Miranda Strother went 3-for-4 with two RBIs and two runs.

Ole Miss added a three-spot in the top of the seventh before Kaitlin Lee, who threw every pitch for the second straight tournament, retired the Tar Heels (40-21) in order in their final at-bat to cap an unbeaten run through the regional for the Rebels, who outscored their opponents 17-2 over three games in their first regional as a host. No team has scored more than two runs against Ole Miss during its winning streak, which began with the Rebels’ first game in the SEC Tournament.

Once Ashton Lampton fielded Leah Murray’s chopper and threw to first baseman Dakota Matiko for the final out, Lee (23-10) pumped her fist and jumped into the arms of catcher Courtney Syrett before the two joined their teammates on the field to continue celebrating in front of the 1,709 in attendance — a crowd that surpassed the 1,677 that showed up for the Rebels’ regional opener Friday as the largest in program history.

“I can’t say enough about our fans,” Smith said. “They were with us. … It’s exciting that our fans were able to experience this. They’ve never been able to do this with softball.”

UNC got to Lee for four hits through the first two frames, taking a 2-0 lead on RBI singles from Kendra Lynch and Brittany West, but Murray’s two-out double in the fifth was the only knock Lee allowed after that. Back-to-back walks, the latter intentional, loaded the bases for the Tar Heels in the inning, but Lee got Berlynne Delamora to ground out to end UNC’s last real threat before Finney’s long ball put Ole Miss ahead for good the next half-inning.

“If there’s anything I love more (than being ahead), it’s being behind and us being like that in the dugout,” Lee said of the players’ energy during the comeback. “That’s one of the funnest games I’ve had in the past 12 games. We love that.”

Murray, who was 2-for-4, had UNC’s only extra-base hit against Lee, who struck out six in her 12th consecutive complete game.

“From the day that I stepped in here, it was our goal to host a regional,” Lee said. “We hosted a regional and now we’re going to the supers, and our goal is to win that thing and go and play with the best of the best once again.”

Housing for All pushing for inclusionary zoning