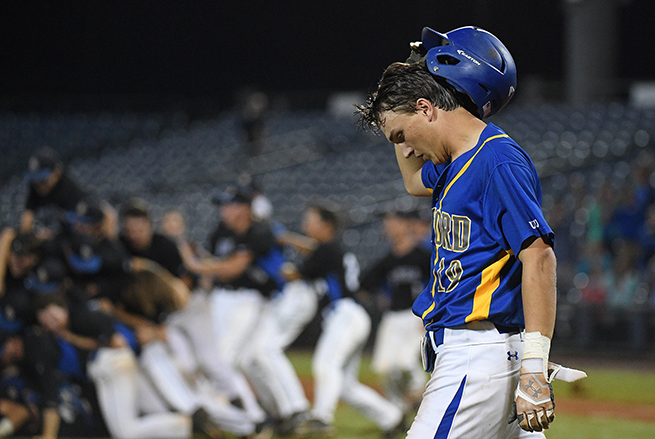 PEARL — The magic ran out for Oxford. The two-time defending Class 5A state baseball champions experienced what it was like to be that team watching what they had done the past two years, win a state title.

Pearl River Central used a 5-run fourth inning to knock off the Chargers, 7-3, in game Game 3 of their 5A state championship series at Trustmark Park on Saturday night. It is the first state championship in baseball for the Blue Devils.

“It’s a case of baseball. It’s a game,” Oxford head coach Chris Baughman said. “In seven years, in terms of losing a ball game, this is probably the easiest I’ve felt after a game in terms of what went wrong. We didn’t do a lot wrong. …(Pearl River Central) got timely hits. Theirs found holes, ours didn’t. It was someone else’s time.”

Once again, Oxford (32-7) jumped out front early, scoring two runs in the bottom of the first inning. Second baseman Sam Bianco led off with a triple and later scored off a sacrifice-fly by Carson Stinnett. Shortstop Drew Bianco would triple after Stinnett’s at-bat and then scored off an RBI-single from first baseman Ben Bianco.

That lead was quickly cut in half the next inning with Pearl River Central (28-12) getting on the board in the top of the second off a RBI-groundout by designated hitter Connor Holston to score first baseman Eli Lee.

The one-run lead held for Oxford until starter Reed Markle ran into trouble in the fourth inning. The Blue Devils took advantage of four hits to plate five runs, grabbing the lead for good and knocking Markle out of the game. The senior lasted three-plus innings, giving up only one hit but walked three and also struck out three.

“(Markle) got us as far as he could get us,” Baughman said. “I thought slider was not locating as well late and that’s why I went and got him.”

Markle gave up two hits and a walk to the only three batters he faced in the fourth inning before Tyler Smith relieved him with a bases-loaded situation. Smith and Bo Gatlin worked the final four innings combined.

The bats that woke up in Game 2 on Saturday, struggled against Pearl River ace Cade Lee, who picked up his eight win and finished the season a perfect 8-0. After the first two runs in the first, the Chargers only managed one more run in the fifth. Lee worked 6 2/3 innings, giving up three runs off six hits while striking out five Oxford batters and did not issue a walk.

“It has been our thing all season if we can hang around for a bit and then have one big inning we will be fine,” Pearl River Central coach Neil Walther said. “I felt like Cade was getting tired, but after the five runs in the fourth, that gave him more energy and he did a great job.”

The last gasp effort for Oxford came in the bottom of the seventh with the bases loaded with two outs and Clark Stovall as the tying run at the plate. Rigell Robinson had replaced Lee but an error by left fielder Zach Rousell and back-to-back walks from Robinson loaded the bases for Stovall to provide some more magic. It was not to be as Stovall struck out, giving the Blue Devils their historic championship win.