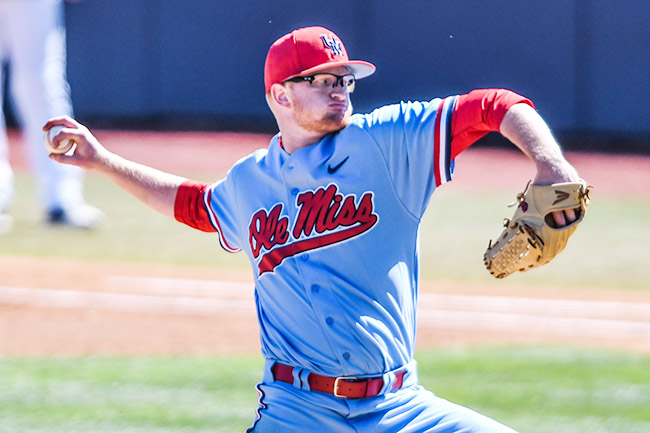 HOOVER, Ala. — With its season possibly on the line, Ole Miss is giving the ball to a pitcher who hasn’t started a game in two months.

Head coach Mike Bianco will throw Brady Feigl against Auburn when the teams meet in their Southeastern Conference Tournament opener Tuesday (4:30 p.m., SEC Network) at Hoover Metropolitan Stadium. It will be the teams’ fourth straight meeting after ending the regular season with a series that the Tigers took over the weekend.

Feigl’s last start came March 18 against Vanderbilt, so he admitted he was surprised when word came from Ole Miss’ coaches Sunday that he would get the nod. But the sophomore right-hander is relishing the chance to pitch the Rebels (32-24) to a much-needed win for its NCAA Tournament resume.

Baseball America and D1Baseball.com both had Ole Miss, which finished ninth overall in the SEC during the regular season with a 14-16 record, as a 3 seed in their latest regional projections, but that was before the series loss at Auburn (34-22) clinched the Rebels’ first losing record in league play since 2012.

“Of course you’ve got to love getting the ball in a situation like this when it’s on the line to get your team a couple more wins to get in the regional,” Feigl said. “I just love to have the opportunity.”

Bianco could’ve opted to go with his usual Friday night starter like many teams do in their SEC Tournament openers, but James McArthur’s recent struggles made Bianco reconsider. McArthur, who gave up three runs on six hits in just 3 1/3 innings his last time out against Auburn on Thursday, has allowed 16 earned runs over his last three starts and hasn’t gone deeper than five innings in any of them.

“And to bump him up two more days, I just didn’t think it was the right move,” Bianco added. “I think Brady’s been good out of the ‘pen and was the next viable guy.”

Feigl began the season in the Rebels’ rotation but was eventually moved to the bullpen after posting a 4.45 earned run average through the first five weekends. He surrendered four runs on five hits in just 5 1/3 innings against the Commodores in his only SEC start.

He’s lowered his ERA to 3.83, allowing just seven earned runs in 21 innings as a reliever. He kept the Rebels close in their 4-1 loss to Auburn on Thursday, working two hitless innings with a pair of strikeouts.

“When they get on a roll, they get on a roll,” Feigl said of Auburn’s offense. “It’s not just one or two runs. They’ll put some damage on you. For us, it’s about making pitches. You’ve got to be able to locate that fastball away and fill up the slider or a secondary offspeed pitch.”

Limiting Auburn’s chances will be even more important with Feigl being opposed by Keegan Thompson, who will throw against the Rebels for the second time in six days. Thompson no-hit Ole Miss for six innings and struck out eight in Thursday’s game to lower his ERA to 2.30, sixth-lowest in the conference.

Feigl has 52 strikeouts and just nine walks in 49 1/3 innings this season, stats that show a propensity for filling up the strike zone. High stakes or not, Feigl isn’t going to change his approach now.

“You’ve got to block out the external noise, which is hard to do,” Feigl said. “But the way you do it is you sit down and you think, ‘OK, I just have to make this pitch.’ And then when that one’s done, no matter what happens with it — if they hit a 400-foot blast or you strike a kid out — wipe it and go to the next pitch. That’s how you stay in that mindset of just staying in that game.”