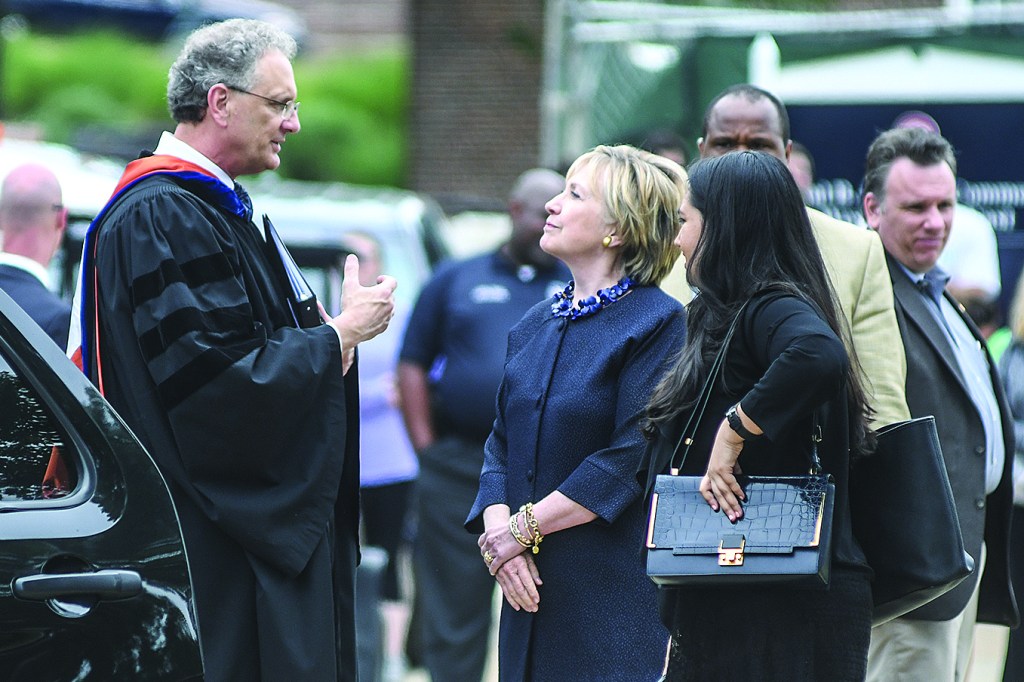 Douglass Sullivan-Gonzalez, left, and Hillary Clinton speak outside of Paris-Yates Chapel at the University of Mississippi, following a memorial service for Carolyn Ellis Staton, on Monday, May 22, 2017 in Oxford, Miss. (Bruce Newman, Oxford Eagle via AP)

Former U.S. Secretary of State and Democratic presidential nominee Hillary Clinton eulogized her longtime friend and law school roommate, Carolyn Ellis Staton, at a memorial service in Oxford Monday. Staton, who was the first female provost at the University of Mississippi, died at her home in Oxford on Friday at age 71.

Clinton, who has made few public appearances after losing the presidential election to Donald Trump in November, first met Staton at Yale Law School in New Haven, Conn.

In a 17-minute eulogy delivered to about 200 attendees at Paris Yates Chapel Monday morning, Clinton praised the life and work of Staton and the relationships she built. She recalled several instances in which Staton championed women’s causes while at Yale in the late 1960s and early 1970s and beyond.

As a “surrogate confessor and godmother” during “a tumultuous time in our country’s history,” Clinton said, Staton helped keep her Yale classmates focused on the future.

“There was a sense of real despair about where our country was and where it was going,” Clinton said. “Carolyn was sympathetic but also very clear that we each had to do our part to get prepared for whatever role might await us in the future.

“And boy, could she make people laugh. You always wanted her to sit with you at lunch because you knew no matter how bad things were, she would get you to laugh,” Clinton said. “You always got a bit envious when she sat somewhere else and the laughter was emanating over from that table.”

Posters of Staton with the words “Go to class!” — an iconic image at Ole Miss that remains plastered around campus — were printed on the front of the memorial service programs. That image, family members said Monday, portrayed her loving attitude: loving, goofy, but stern.

As she approached the podium to begin the eulogy, Clinton held the image up and said, “How perfect is this?”

Staton, who was Lebanese, became known at Yale Law as the person who could bridge gaps between races during their time there, Clinton said.

“Carolyn Ellis became one of the touchstones, the foundations of building relationships among our classmates,” Clinton said.

When Staton was receiving treatments for cancer in New York, even during the last presidential campaign, Clinton tried as often as possible to make time to see Staton. On one visit last fall, Clinton went with Staton and her family to The Late Show with Stephen Colbert, and Clinton got Staton’s family into Broadway hit Hamilton.

“The joy she brought to so many was something we tried to give back in some small measure to her,” Clinton said.

“It is hard always to lose a beloved wife and mother, a sister and aunt, a cousin. It’s also hard to lose a friend,” Clinton said. “She will be so missed. Her investment in all of us will live on. Thank you, Carolyn, for being who you were and who you remain to all of us. Godspeed, my friend.”

Staton was a trailblazer at Ole Miss. The Vicksburg native became the provost in 1999, serving as chief academic officer and second highest ranking university official until she retired in 2008. Staton also was appointed to two federal committees during the administration of President Bill Clinton.

As provost, she developed the idea for the Croft Institute for International Studies, contributed significantly to the creation of the university’s residential colleges and helped build several programs at the Sally M. Barksdale Honors College.

“Carolyn took the lead of reaching our goal of having a nationally competitive academic program,” former Ole Miss Chancellor Robert Khayat said over the weekend. “She started so many uplifting, inspirational initiatives, especially as it involved leadership for women on campus and around the country. So many people are heartbroken over her loss.”

“She popped up as someone who always had access to either Clinton,” said Burns Strider, a political consultant who has worked for years with Hillary Clinton. “She was always cleared no matter the location or event. … They developed a friendship that was deep and permanent.”