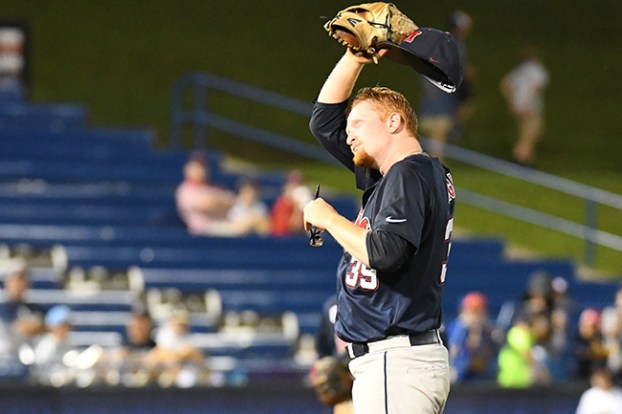 Ole Miss pitcher Brady Feigl vs. Auburn in the SEC Tournament at the Hoover Met in Hoover, Ala. on Tuesday, May 23, 2017. Ole Miss was eliminated with a 5-4 loss.

HOOVER, Ala. — All Ole Miss can do now is wait.

The Rebels went one and done in the Southeastern Conference Tournament with a 5-4 loss to Auburn at Hoover Metropolitan Stadium late Tuesday night, losing for the fourth time in their last five games. Ole Miss dropped to 2-3 in tournament openers since the league expanded to 14 teams in 2013.

It leaves the Rebels (32-25) with what’s sure to be an agonizing six days before finding out if their resume is good enough for an at-large berth into the NCAA Tournament when the field of 64 is announced Monday. Ole Miss was the No. 9 seed in the conference tournament after going 14-16 in league play during the regular season and had an RPI of 32 before their third loss in four games to the Tigers, who won the teams’ final regular-season series over the weekend.

“We’re getting ready for a regional in a few weeks,” outfielder Will Golsan said. “Just go about our business in practice and be ready for it.”

D1Baseball.com had Ole Miss as a 3 seed in the Winston-Salem (Wake Forest) Regional in its most recent regional projections released Tuesday morning, but the Rebels’ RPI fell to 35 after the loss. Ole Miss’ strength of schedule is ninth nationally while the Rebels have 13 top-50 RPI wins, but no SEC team with the combination of a losing conference record and a sub-30 RPI has made the NCAA field in the last five years.

Ole Miss led 2-0 after three innings, but Auburn (35-22) worked its way back against four Rebel pitchers while Ole Miss couldn’t do much against Auburn ace Casey Mize in six innings of relief. The Tigers had a 5-3 lead before Ole Miss got its first earned run against Mize on Ryan Olenek’s solo homer in the ninth, but Mize got a groundout and a strikeout to hand the Rebels an early tournament exit.

Golsan was the only Rebel with multiple hits, finishing 2-for-3 with two runs scored. Nick Fortes and Kyle Watson, filling for the injured Grae Kessinger at short, each drove in a run.

After getting no-hit by Keegan Thompson for six innings in Auburn’s 4-1 win Thursday, Ole Miss had a 1-0 lead three batters in against the right-hander Tuesday after a single from Golsan and a double from Fortes. Watson added to it with an RBI single in the second, one of four hits the Rebels had against Thompson before Auburn went to Mize after the third.

“We came out swinging,” Golsan said. “That’s what we talk about in our hitters’ meeting. That’s our approach. We tried to do that to the best of our ability.”

Mize, who didn’t throw against the Rebels in the teams’ series over the weekend because of arm fatigue, retired six of the first seven batters he faced and worked three clean innings with a heavy splitter and a fastball that touched 96 miles per hour, scattering just three hits and striking out nine. Mize (7-2) dropped his 1.97 earned run average, third-lowest in the SEC, to 1.90 by the time he struck out Bryan Seamster to end it.

“You’ve got to respect the splitter,” Golsan said. “It was an 89-mile-an-hour splitter. He had a hard fastball and a good splitter tonight.”

Said Bianco, “It’s unfortunate, but we faced two of the better pitchers in our league tonight.”

In his first start since March 18, Ole Miss’ Brady Feigl turned in his longest outing since going 4 1/3 innings against Mississippi State on March 31 but couldn’t get out of the fourth. A two-out RBI double from 9-hole hitter Will Holland ended Feigl’s night before both of the runners Houston Roth inherited came around to score on Jonah Todd’s triple to deep center that gave the Tigers their first lead.

Feigl was charged with three runs on five hits while striking out two and walking one.

“I started getting behind a little bit and made it tough on myself going 2-0 on the last batter,” Feigl said. “(Holland) was sitting on that fastball and put a good swing on it. Still felt good. It was just that time of the game.”

The Rebels’ best chance against Mize came in the sixth when Golsan led off with a double and scored to tie it at 3 when first baseman Dylan Ingram threw Fortes’ bunt away, allowing Fortes to advance to second with nobody out. But a groundout, a flyout and a popout kept Fortes there before Blake Logan took Will Stokes (2-2) deep in the Tigers’ next at-bat to put Auburn ahead for good.

HOOVER, Ala. — Ole Miss baseball has been hit with a significant injury just hours before beginning a crucial Southeastern Conference... read more