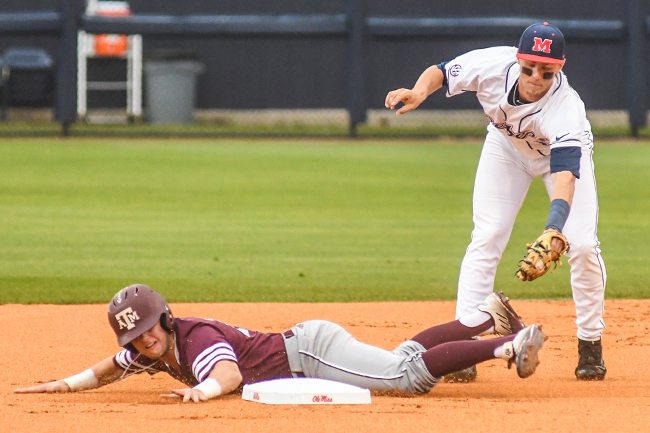 Texas A&M's Nick Choruby (18) is safe with a stolen base as Mississippi's Grae Kessinger (15) takes the throw at Oxford-University Stadium in Oxford, Miss. on Friday, May 12, 2017. (Bruce Newman, Oxford Eagle via AP)

HOOVER, Ala. — Ole Miss baseball has been hit with a significant injury just hours before beginning a crucial Southeastern Conference Tournament.

Freshman shortstop Grae Kessinger will miss the rest of the season with a broken foot, his father, Kevin, said. Kessinger, the former Oxford High standout, had been playing with an injury, but an X-ray on Tuesday revealed a fracture, Kevin said.

Surgery has not yet been scheduled.

Ole Miss later said in a statement that Kessinger suffered the fracture during “a freak accident” while playing ping pong in the players’ lounge at the SEC Tournament. The Rebels (32-24) open the tournament today against Auburn (34-22) at 4:30 p.m. at Hoover Metropolitan Stadium.

With a 14-16 record in SEC play during the regular season and an RPI of 32, the Rebels are squarely on the bubble for the NCAA Tournament. D1Baseball.com’s latest regional projections released Tuesday morning had Ole Miss as a 3 seed in the Winston-Salem Regional.

Kessinger has been the Rebels’ everyday shortstop all season, hitting .175 with two home runs, five doubles and 16 RBIs. The 6-foot-2, 190-pounder’s biggest impact came defensively with extended range and a strong arm from the left side of the diamond.

Kyle Watson or center fielder Ryan Olenek, who played some at third earlier this season, could fill in at shortstop.