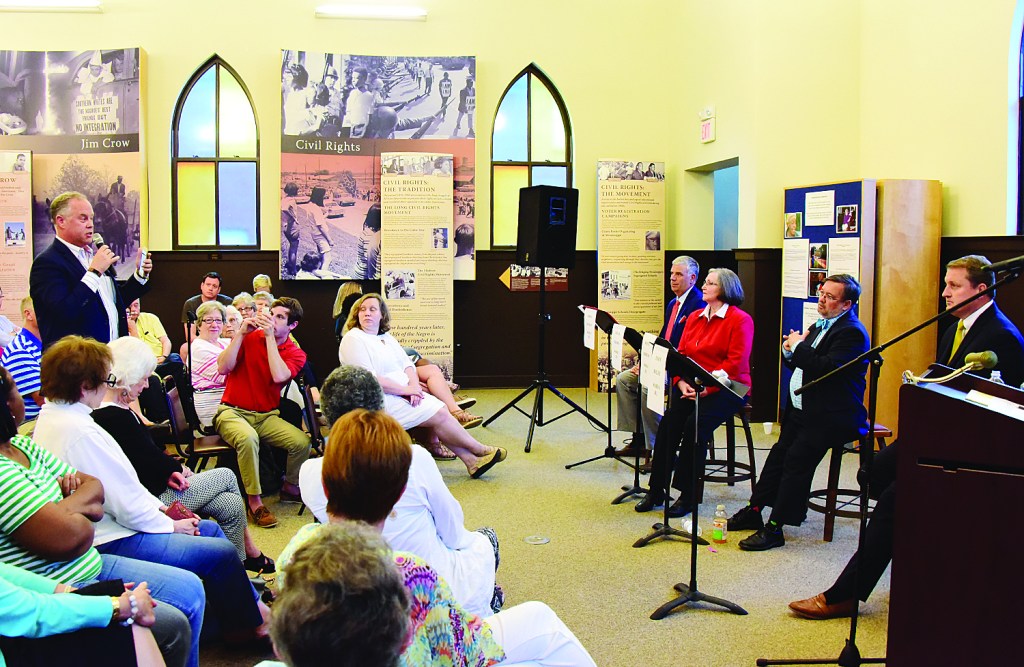 Jon Fisher poses a question to the Ward 2 and Ward 6 alderman candidates during the League of Women Voters Oxford/North Mississippi forum Tuesday night at the Burns-Belfry Multicultural Center. (Photo/Joey Brent)

Local candidates seeking to gain — or keep — a seat on the Oxford Board of Aldermen discussed several issues facing Oxford, from infrastructure, growing pains, recycling and taxes during the League of Women Voters Oxford/North Mississippi’s first candidate forum Tuesday evening.

The forum was held to give constituents living in Wards 2 and 6 a chance to meet the people running for aldermen in their wards and was not run as a debate.

The forum was held in the historic Burns-Belfry Multicultural Center close to the center of Oxford, which was apropos since much of the discussion centered around keeping Oxford Oxford and preserving what makes Oxford a special place to live.

Each candidate was given three to five minutes to introduce themselves and then candidates fielded questions from the audience. All candidates were given two minutes to reply to a question.

About 100 people attended the event, making it standing-room-only in the small historic church.

Resident and former alderman Jon Fisher asked the candidates if they have thought of creative ways to fund projects, like a new school or new roads, that would not require raising taxes for Oxford citizens.

Bailey said the city does need to get more creative in finding ways to fund projects.

“We have looked at our Baptist funds and how that works, we can use it but we have to pay that back,” he said. “The schools is one thing, with the new elementary school coming about, is just something that is needed. Any option on the table, whether it’s a TIF (tax increment financing) or using Baptist funds, or federal funds we’re going to look at every option available to us.”

Andrews said solving such problems is one reason he chose to run for alderman.

“We are fortunate in Mississippi in that our taxes are still low in comparison, but it is still a burden,” he said. “We do have to think creatively. Can we use the money from Baptist and the interest from that to finance a loan? Can we tap into some things that are rental related to generate money? Can we do other fees that would tap into the other parts of the community that aren’t paying into the base? We are a town of 20,000 supporting 60,000 people, we have to figure out how to tap into that … and having conversations with the university and county on how we fund some of the services we provide.”

Resident Kate Kellum asked the candidates their thoughts on using the University of Mississippi, its students and alumni to benefit Oxford and ways to improve the relationship between the city, county and university.

Huelse said he believes the relationship between the city and university has improved over the last few years and suggested the leaders needed to spend more time having regular conversations.

“In Starkville, the chancellor, mayor and supervisors meet every week for coffee and just sit down in a casual atmosphere and talk about what’s going on,” he said. “I’d like to do the same thing. Some great ideas could come out of that.”

He also suggested using the university’s faculty, staff and other experts in their fields to help with city projects.

Shanks said, as a native of Oxford, she’s always enjoyed the relationship with the university.

“The university brings us so many resources,” she said. “I agree the relationship has improved. Just recently,  a group of women from the university invited us, another group of women to come and have lunch. It’s the little things like that that create a community where we get to know each other. I’m encouraged and excited about the future of the Oxford and Ole Miss relationship.”

Milly West asked the candidates about the environmental impact of development in Oxford and what steps the candidates believe should be taken to protect Oxford’s tree canopy and green spaces.

Bailey said an environmental impact study is done for each development and the city has recently upgraded its tree mitigation and storm water retention ordinances.

“If there’s something you feel like we need to do additionally, we are all ears,” he said. “We are happy to look at new ideas that won’t have too much of a negative impact. See, the thing about regulations, it tends to go toward the developer and developer has to pay for them and then it goes back onto the consumer and that’s where the issue of affordable housing comes into play.”

“That is also covered in the implementation plan in the Vision 2037 plan. I think it’s important for citizens to come forward at meetings where you can give input to assert the things that you feel are important,” she said.

Andrews also suggested the community get involved with Oxford’s future growth by being involved in the upcoming zoning and ordinances changes coming before the aldermen soon as they relate to the Vision 2037 plan.

“The nuts and bolts of that plan are about to happen,” he said. “All of us need to be actively involved. Now is a review period. There is time for thoughtful review. We all need to involved now as things are going to be voted on.”

Huelse, who sits on the Oxford Planning Commission, agreed now is the time for community members and city planners to carefully review the new ordinances.

“We have the strongest planning department we’ve had for years,” Huelse said. “We have outstanding personnel in our planning and building department who now have the time to review all of that. They have the ability to review projects now to make sure people are doing things right. We have two code enforcement officers now which we didn’t have in years past. Having a strong planning department is the key.”

The general election is June 6. All Ward 2 and 6 voters will cast their votes at the Oxford Conference Center where polls will be open from 7 a.m. to 7 p.m.