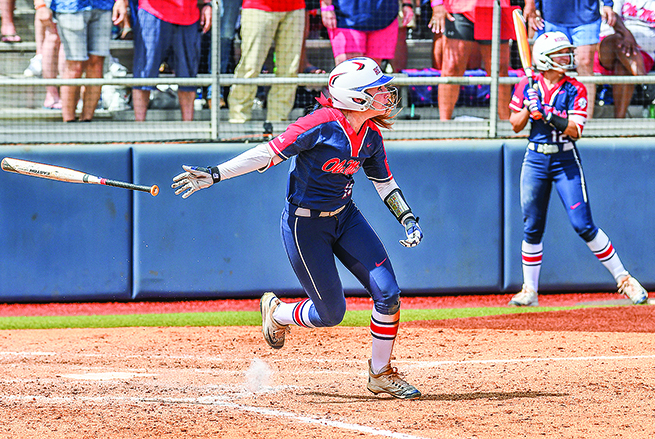 Kaitlin Lee has been the hot name for Ole Miss during its unprecedented postseason run with 12 consecutive complete games in the circle, but a pair of teammates have been equally as hot in setting the table for an offense that’s supplied the support.

Elantra Cox and Kylan Becker are the Rebels’ top hitters in more ways than one. The first two batters in Ole Miss’ lineup, Cox and Becker have sported the Rebels’ top averages all season. Cox is second in the Southeastern Conference with a team-best .438 average while Becker is hitting at a .378 clip.

Those numbers have actually gone up during Ole Miss’ seven-game winning streak, which has the Rebels two wins from a berth in the Women’s College World Series. Ole Miss (43-18) will begin its first-ever super regional at UCLA, the No. 5 national seed, today at 8 p.m. CT.

Game 2 of the best-of-three super regional will be Friday at the same time with an if-necessary game set for Saturday at 6 p.m. CT.

“There’s a reason they’re at the top of our lineup,” Ole Miss coach Mike Smith said. “Our offense goes as they go.”

Cox, the Rebels’ leadoff hitter, leads the SEC with 91 hits, a single-season school record, with 14 of those coming in the SEC and regional tournaments. Cox went 2-for-4 with a pair of RBIs to help the Rebels top LSU to clinch the league championship before racking up eight hits in her nine regional at-bats.

Cox and Becker, who have also combined to steal 40 bases, form a speedy duo that usually makes its living slapping its way on base and creating havoc once there. Cox finished the regional with back-to-back three-hit games, combining with Becker for four singles and three runs in the title-clinching win over North Carolina.

“They put the ball in play a lot, and they made it happen,” UNC coach Donna Papa said. “Their leadoff hitter, Cox, is so athletic and such a good player. They are just very athletic.”

Infield singles are an integrated part of Ole Miss’ offense with Cox and Becker as the catalysts, so much so that Smith referred to their ability to beat out high choppers “prototypical Ole Miss.” Cox paces the Rebels with a .475 on-base percentage while Becker isn’t far behind at .421 while the pair have combined for 85 runs.

“I don’t think there’s a better 1-2 combination in the country than those two at the top of any lineup,” Smith said. “They are potent no matter what they do. Even if Elantra doesn’t get on, Becker is going to set the table for whoever’s behind.”

The duo mixed in some pop in the regional. Becker, who’s 10-for-22 in the postseason, had a triple and an inside-the-park homer as part of a five-RBI night in Ole Miss’ tournament opener against Southern Illinois before the two hit back-to-back triples for the winning margin in the Rebels’ 2-0 win over Arizona State on Saturday.

“We’re always looking to get a high hop, but when we can put something in the grass, we put it in the grass,” Cox said with a smile.

Ole Miss will take whatever it can get from its table setters against the Bruins (45-13) as the Rebels try to make more history.