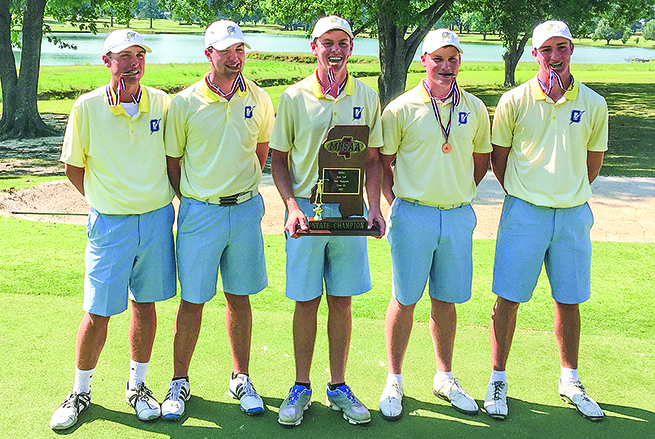 Oxford has racked up a lot of hardware this school year. Nine state titles to be exact that came from sports all across the board. One sport pitched in by winning their first state championship since 2013, the Oxford High boys’ golf team. The Chargers defeated Germantown by six strokes (601-607) earlier this month to claim the MHSAA Class 5A golf championship at the Country Club of Canton.

It was the final state team title Oxford would win this school year and ended a four-year drought in the trophy case for the golf team.

The five-some of CJ Easley, Wilson Baker, Matt Sink, Beau Ryals and Mark McManus put together some of their best rounds of their season, or career for some, to bring home the trophy.
“It was a great year for all of us,” Easley said. “We all individually played well, but as a team we all helped each other and pushed each other to get better. By the end of the year it worked out the way we wanted.”

The state championship was held during May 7-9, with one practice round and two tournament rounds. After the first round, Oxford had a combined score of 305. With a lot of ground to make up, The Chargers made every shot count on the final day, shooting a combined score of 296. Teams are allowed to drop whichever player shot the highest round each day. In the first round, Ryals shot an 80, which was dropped. Ryals made up for that by going out and skimming nine strokes off his first round, shooting a 71. It was the team’s best score in round two and included an eagle on the fourth hole, which followed an eagle by a team in the group ahead of him.

“Both days were perfect. You couldn’t ask for better days to play golf,” Ryals said. “Perfect scoring conditions. The first day wasn’t the best for all of us but, we felt like we had something to prove (in round two). …I really put too much pressure on myself the first day. Just thinking I had to shoot the first day what I shot the second day. The second day I just played golf like I was out there by myself.”

The state championship capped off a year where Oxford won two other tournaments in the Tupelo Invitational and the Corinth Invitational. They also claimed the region championship for the third straight season.