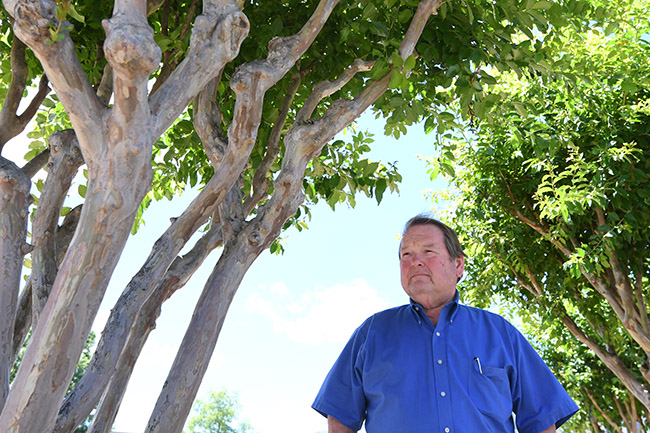 After being hired by then-Mayor John Leslie to form a Building and Grounds Department, Billy Lamb was taken to the basement of City Hall to see his new office.

“He opened a door to a dark room with no lights and told me this is where I would be working,” Lamb told the EAGLE recently.

His only help were the occasional inmates from the Lafayette County Detention Center.

Today, Lamb works out of a large office on McElroy Drive with 14 full-time and six part-time employees.

However, on June 30, Lamb will leave his office for the last time when he retires after 23 years of keeping Oxford clean and colorful.

Lamb and his crew have a wide range of jobs around the city. They maintain all city buildings, Pat Lamar Park and the Square. They plant flowers and trees and put up the Christmas lights each year. They sweep streets and run the city’s tree farm. They fix things and beautify the city.

Lamb said his first official employee, the late Joe Brooks pushed a Georgia buggy around to sweep the streets.

“We’ve come a long way in our department,” he said. “What makes me feel old though, is walking around town and seeing big, full trees that I planted almost 25 years ago.”

Lamb said he will miss working with his crew and visiting with people every day around the Square, but that at almost 62, he felt it was time to move onto a new chapter in his life.

“I enjoy what I do,” he said. “But a good manager is supposed to pick up a job and take it as far as they think they can take it and then lay it down and let someone else pick it up, and that time has come for me.”

Prior to being hired by Leslie, Lamb owned a painting contracting service.

“I learned so much when I started here,” he said. “I learned from Mayor Leslie and Virginia Chrestman (former city clerk) everything about city government.”

Lamb served as a Lafayette County Supervisor from 2003-2007. During that time, he went to Washington D.C. where he was able to secure funding for the renovations to the Lafayette County Courthouse. He’s served on the Mississippi Urban Forestry Board for several years, as well as the city’s Tree Board.

Lamb is married to Wanda Lamb. After losing their only child, Jeremy in February, the birth of his son, William Wayne, has brought renewed joy to their lives.

After retiring in June, he plans on spending more time with his family and on his two main hobbies — making furniture and playing music.

“I own 18 guitars,” he said, chuckling. “I’ve played lead guitar with my band, Sole for many years and it’s the No. 1 thing I enjoy doing.”

“He’s a genius when it comes to fixing anything,” Patterson said. “He will be missed, but on behalf of the city of Oxford, we wish him the best in his well-deserved retirement.”

Greg Pinion will serve as the interim director of Building and Grounds after Lamb’s retirement.

Lamb ended his interview with the phrase that anyone who has met him has heard him say, probably more than once.