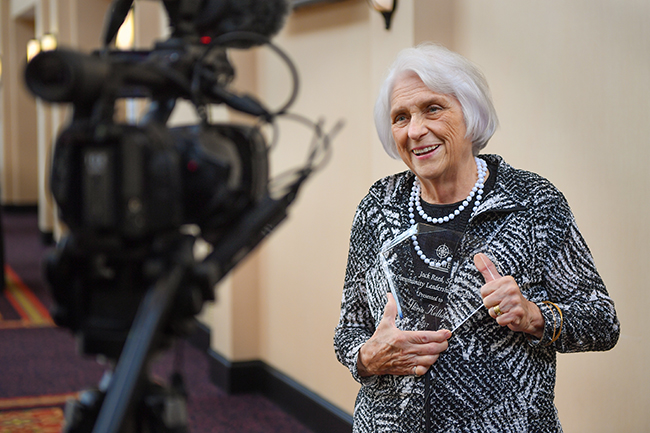 The award is named for Reed, the community and state leader, and icon who died in 2016. Kellum said she is honored to receive an award named for the man she so greatly respected, admired and served with on the CREATE board.

“I deeply appreciate it and I’m honored to have this award.”

The award was presented at the CREATE Foundation’s Commission on the Future of Northeast Mississippi’s “State of the Region” meeting at the BancorpSouth Conference Center.

One of Lafayette County’s representatives on the commission, Kellum will receive an opportunity to designate a gift of $2,000 to a charity of her choice. She said she would carefully consider her decision.

Kellum went to work at UM in 1966 and helped re-establish the speech and hearing program. She taught speech-language pathology at Ole Miss for more than 45 years and, in 1975, was selected for the prestigious Elsie M. Hood Outstanding Teacher Award.

She earned bachelor’s and master’s degrees in speech-language pathology as well as a doctorate, all from Louisiana State University. In 2004, she was inducted into LSU’s Alumni Hall of Distinction.

In 2011, she received the Honors of the American Speech-Language-Hearing Association, the highest accolade given by this national organization.

With then-UM Chancellor Robert Khayat and committed alumni and university staff, she helped coordinate the Commitment to Excellence Campaign from 1998 to 2001, which attracted more than $525.9 million in private support for Ole Miss. She coordinated development, public relations and special events and also directed the $240 million MomentUM Campaign.

Kellum retired as vice chancellor for university relations and professor of communication sciences and disorders in June 2009. She is married to Jerry Kellum, and they have two daughters, Kate and Kelli.

After retiring, she has remained active with many nonprofits in Oxford and Northeast Mississippi and continues to consult with the University of Mississippi Foundation.

She credits the professional opportunities Ole Miss afforded her family with instilling in her a commitment to help others achieve.

“The opportunities for professional and personal growth have been phenomenal for me,” Kellum said. “When you have those kinds of opportunities, you need to turn around and help others.

“These stakeholders who were kind enough to nominate me are also the people who have rolled up their sleeves and are helping others.”

The CREATE Foundation, which owns Journal Inc., publisher of the Northeast Mississippi Daily Journal and other newspapers, has given more than $96 million to communities and organizations during its 44-year history. It carries out projects in 17 counties, which makes it the largest community foundation in the state.

Journal Inc. paid a special dividend to CREATE to establish the Jack Reed Sr. Leadership Endowment Fund. Annual recipients of the new award will be able to designate $2,000 to the charity or charities of their choice from that endowment fund.

The group appreciated Kellum’s dynamic service during her time as a member of CREATE board and also appreciates her work with the commission, said Lewis Whitfield, CREATE’s senior vice president.

“She’s been important,” Whitfield said. “She is very knowledgeable in all aspects of education and that to us is the key to the future prosperity: high-quality education.”

Kellum exemplifies the leadership qualities the group wanted in its first Reed Award recipient, he said.

“Dr. Kellum has the highest degree of integrity,” Whitfield said. “She is extremely bright and wonderful with people.

“She is great at building relationships with people and she has a great record of success at Ole Miss.”