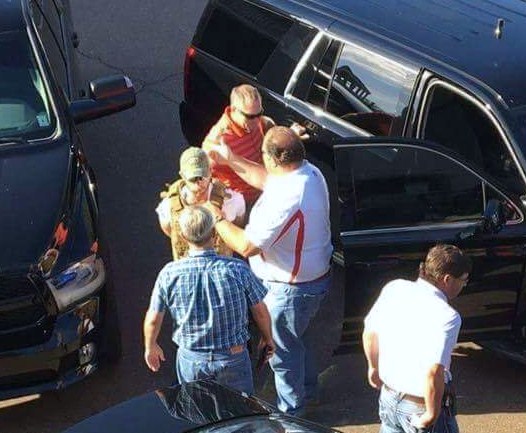 This photo of Matt Reardon being arrested for aggravated stalking Friday evening has been shared more than 100 times on social media sites. Photographer unknown.

Matt Reardon, the man arrested earlier this month for defying a sheriff’s deputy after being asked to leave from in front of the Lafayette County Courthouse while waving the state flag, was arrested again Friday evening.

The Lafayette County Sheriff’s Department confirmed Reardon was charged with aggravated stalking but would not release the name of the victim.

Chief Investigator Alan Wilburn said Reardon is currently only charged with one count, however, due to the holiday weekend, he will not go before a judge for a bond hearing until Tuesday.

Reardon was arrested May 1 and charged with disorderly conduct. Lafayette County Sheriff’s Deputy Timmy Pruitt approached Reardon who was standing near the Confederate monument holding the state flag, and told him he would have to leave because he didn’t have a permit. Reardon, who had a firearm in a holster, walked away after cursing at the deputy, but then turned back and started walking toward the deputy, demanding to know Pruitt’s name and badge number. Pruitt arrested Reardon and took him to the Lafayette County Detention Center where Reardon was later released on a $250 bond. His court date for the disorderly conduct charge is June 5 at the Lafayette County Justice Court.

Since his arrest, Reardon has posted verbal threats against several local residents, including attorney Rhea Tannehill and his wife, mayor-elect Robyn Tannehill and local businesses. His Facebook account has reportedly been blocked several times after his posts were reported to Facebook.

Correction (9:50 p.m.): An earlier headline indicated Reardon was arrested on charges of stalking a public official, which is incorrect. We regret the error.