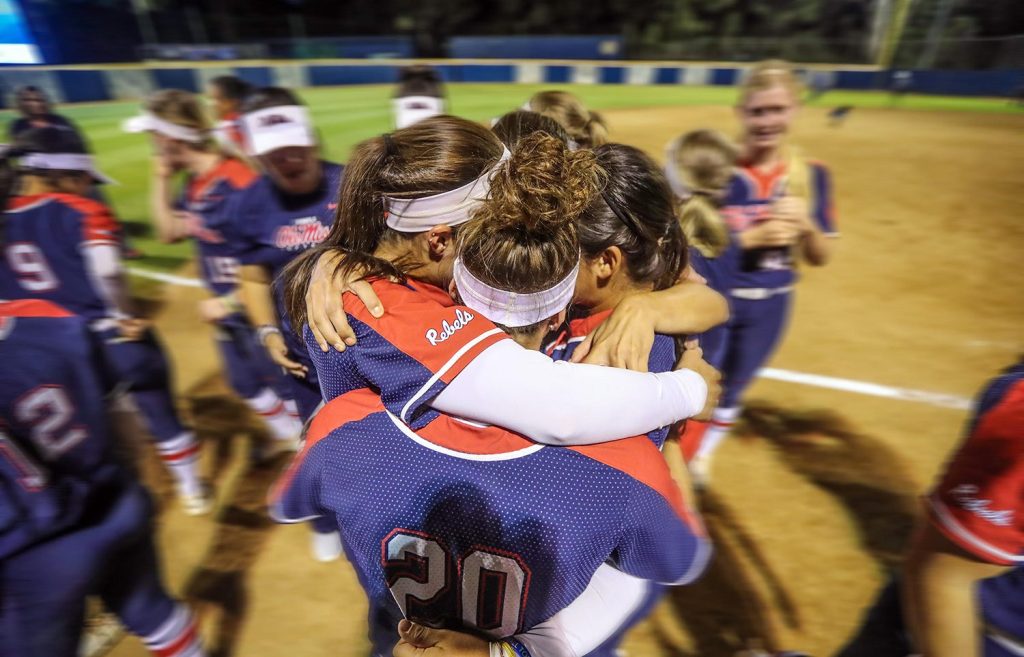 Ole Miss vs. UCLA in Game 2 of the Super Regionals of the 2017 NCAA Tournament in Los Angeles. (Joshua McCoy/Ole Miss Athletics)

An early run for UCLA proved to be enough in a 1-0 win at Easton Stadium in Los Angeles as the Bruins swept the teams’ best-of-three super regional to clinch their spot in the Women’s College World Series. Meanwhile, the best season in Ole Miss’ history came to an abrupt end after an improbable postseason run.

An upset run to the Southeastern Conference Tournament title made the Rebels (43-20) a No. 12 national seed and started a string of seven straight postseason wins, which included a regional championship playing as a host for the first time ever, before back-to-back losses — their first since April 22-23 at Florida — in a span of 24 hours brought it all to a halt.

A night after racking up 11 hits in an 8-7 loss in extra innings, Ole Miss mustered just three hits with two of those coming from first baseman Alyssa Gonzalez, who went 5-for-6 in the super regional. None of them came against Rachel Garcia (22-7), who came on for Selina Ta’amilo after throwing 232 pitches in UCLA’s Game 1 win and faced just one over the minimum in the last four innings with five strikeouts to get the win.

Ole Miss had chances despite the lack of hits, putting a runner on in all but two innings, but situational hitting again doomed the Rebels, who went 0-for-15 with runners on and finished the super regional 0-for-17 with two outs. Ole Miss’ last real threat came in the fourth when Gonzalez’s leadoff single and a walk put two runners in scoring position, but Garcia came on to get a lineout and a strikeout to squash it.

Ole Miss coach Mike Smith gave the ball to someone other than Kaitlin Lee for the first time in the postseason, opting for Brittany Finney after Lee threw 191 pitches in Thursday’s loss.

Making her first start in the circle since May 6, Finney (6-1) gave up a pair of back-to-back two-out hits in the first, the latter an RBI single from Madeline Jelenicki to give the Bruins (46-13) the early lead, but the sophomore right-hander scattered just two more hits the rest of the way, struck out five and worked around an error in the top of the seventh to keep the Rebels close.

Garcia issued her lone walk with one out in the fifth, but UCLA used a strike-’em-out, throw-’em-out double play to end Ole Miss’ half of the inning before she retired the last six batters she faced to end the Rebels’ fairy tale season, which also saw Ole Miss set a single-season record in wins.