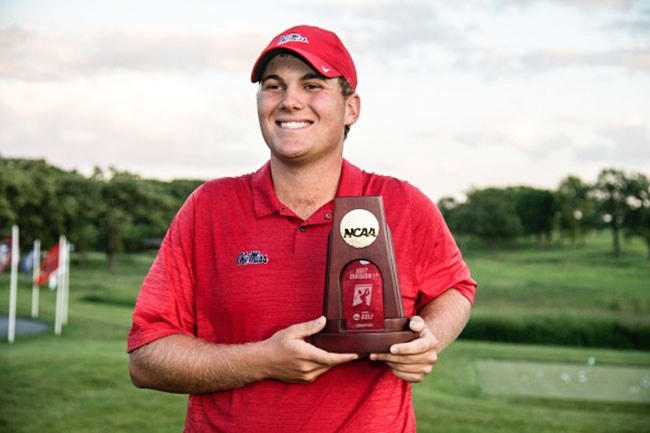 Thornberry, a sophomore at Ole Miss, came from behind with a 1-under 71 in his final round to cruise to the NCAA men’s individual championship at Rich Harvest Farms in Sugar Grove, Illinois. The title is the first individual or team NCAA championship in program history.

The first Southeastern Conference player to win the men’s individual title since LSU’s John Peterson in 2011, Thornberry trailed Texas’ Scottie Scheffler by two shots entering the day, but Thornberry surged as Scheffler struggled in the final round. Thornberry won the championship by four strokes, finishing 11-under par for the tournament, while Scheffler tied for third with Vanderbilt’s Matthias Schwab after shooting a 6-over 78 to finish 6-under for the tournament. Arkansas’ Mason Overstreet finished runner-up at 7-under by matching Thornberry’s 1-under for the day.

The four-stroke win is the largest margin of victory in the individual championships since 2006. The seventh career victory already ties Thornberry for the school record.

“It means a lot to be the champion,” Thornberry said in an interview with the Golf Channel. “As far as the team, we knew we were going to have a special year when we started off. We didn’t finish worse than second in the fall, and this spring we had some more wins. We knew it was going to be a special year and we weren’t surprised at all.”

A native of Olive Branch, Thornberry capped his final round with a birdie on the par-5 18th, just his second birdie of the day. His first came on the par-3 third after opening with back-to-back pars before he made a bigger move with an eagle on the par-4 sixth. Thornberry set himself up for a one-putt on the hole by driving the green with a thunderous strike.

“In the practice round, I kind of hit that same shot and came up short, but it was a little into the wind,” Thornberry said of his tee shot on the sixth. “I knew the driver was going to be perfect today. The wind was left to right, and I happened to hit a good one. Got up there and hit the putt. That was real big in momentum.”

Thornberry didn’t have anything worse than a bogey during his final round and carded pars on nine of his next 11 holes to take a four-shot lead into the final hole.