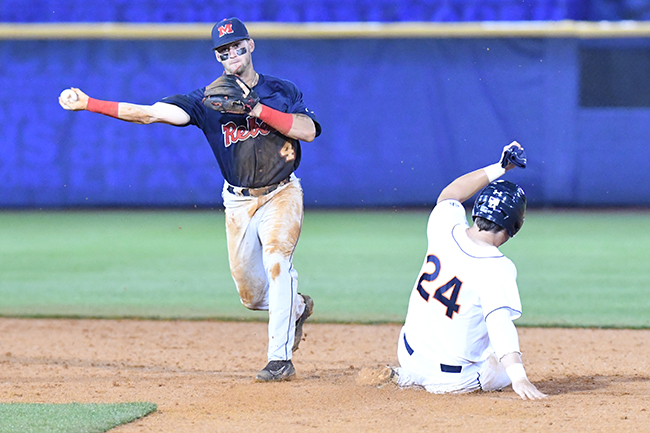 Ole Miss' Tate Blackman vs. Auburn in the SEC Tournament at the Hoover Met in Hoover, Ala. on Tuesday, May 23, 2017.

Monday officially ended Ole Miss’ season, and Tate Blackman isn’t sure if the end of his collegiate career came with it.

Blackman, the Rebels’ junior second baseman, will wait to see if his name gets called during the Major League Baseball First-Year Player Draft, which begins June 12. Blackman said he’s received some feedback on when he could be selected during the three-day draft but wants to see exactly where he’s picked before possibly entertaining the thought of skipping his senior season.

“Just keeping my ears open,” Blackman said hours after Ole Miss didn’t receive an at-large berth into the NCAA Tournament. “Whatever happens with it, I don’t know. I could leave. I could come back. I always just take it day by day.”

Blackman has been the Rebels’ everyday second baseman the last two seasons after a rocky freshman year in which he hit .197 after signing with Ole Miss as one of the top 100 high school prospects nationally. Blackman, a preseason second-team All-SEC selection, hit .302 this season with a career-high nine home runs, 10 doubles and 30 RBIs and posted a .420 on-base percentage while spending most of the season as Ole Miss’ leadoff hitter.

He wasn’t drafted after hitting a career-best .322 last season despite being a draft-eligible sophomore. Blackman’s glovework has been an issue at times with a combined 23 errors the last two seasons.

“Right now, I’m just going to go home (to Florida), stay at my parents’ condo, fish for a little bit, relax a little bit and let whatever happen,” Blackman said. “If not, I’ll come back and enjoy my last season here.”

Blackman isn’t the only Ole Miss underclassman that may have a decision to make.

Left-hander David Parkinson, who spent most of the season as the Rebels’ Saturday starter, and reliever Will Stokes could be picked with a year of eligibility left. Right-hander Brady Feigl is eligible for the draft as a third-year sophomore.

“I don’t really know what happens in the draft,” said Bortles, a three-year starter. “I’m going to pack my house up and head out and go see my family, see my brother and just kind of wait it out.”