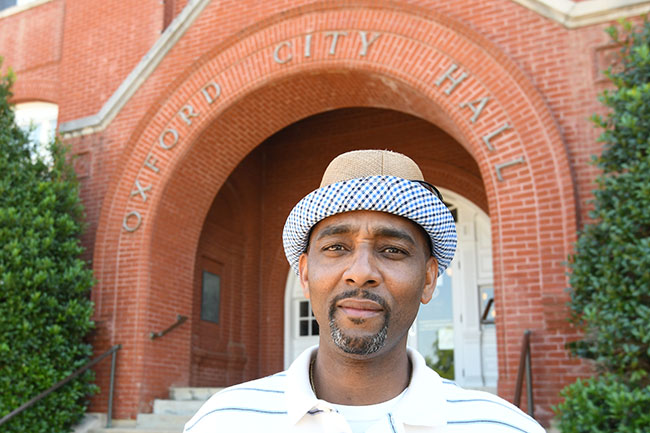 Bruce Newman Delaine Rockette is the recipient of the city of Oxford’s Virginia H. Chrestman Memorial Outstanding Employee of the Year Award.

Twenty-one years ago, Delaine Rockette started working for the city of Oxford on the back of a garbage truck, picking up trash.

Through hard work and dedication to his job, he is now a foreman in the Environmental Services and as of Friday, the fourth Virginia H. Chrestman Memorial Outstanding Employee of the Year for the city of Oxford.

Rockette received a check for $1,000, a certificate and his name added to the growing list of award recipients Friday during a short award ceremony at City Hall. He and his family were also treated to lunch at McEwens.

The award was established in memory of Chrestman, who worked for the city of Oxford for 30 years as secretary, deputy city clerk and from 1974 until 2003, served as city clerk, working under former mayors John Leslie, Patricia C. Lamar and Richard Howorth, and current Mayor George “Pat” Patterson.

Rockette was nominated by Vicki Robison, who also works in the Environmental Services Department.

“(Rockette) is very friendly and has a good attitude,” Robison wrote about Rockette. “He is good with customers and does whatever it takes to satisfy them … He goes above and beyond.”

Rockette said he was surprised to learn he was selected.

“I’m honored,” he said Friday. “I just come to work every day and do my job.”

Amberlyn Liles, superintendent of the Environmental Services, has worked with Rockette for close to 17 years.

“Several times he’s called me at night, worrying about something and I’ve had to tell him to calm down and we’d deal with it in the morning,” she said Friday. “He knows this department inside and out. He’s a hard worker and takes a lot of pride in what he does.”