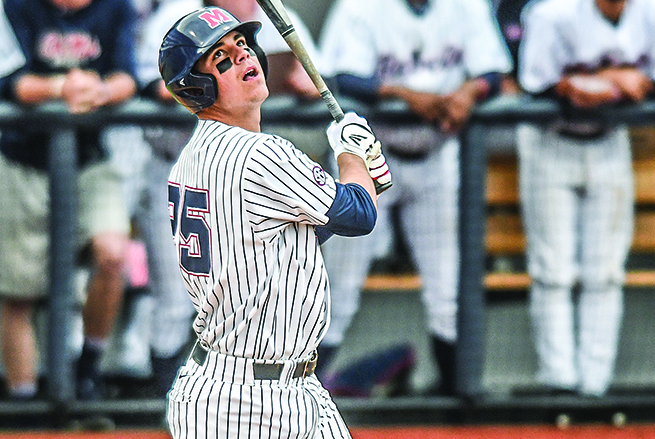 Ole Miss’ Colby Bortles, above, manned the ‘hot corner’ for the Rebels over the past three seasons and had one of his better seasons at the plate during his senior campaign. (Bruce Newman)

Having a brother as a starting NFL quarterback comes with plenty of recognition, but Colby Bortles’ coach believes the third baseman will be remembered at Ole Miss for more than his last name.

Bortles just wrapped up his four-year career with the Rebels, the kind of collegiate longevity that’s becoming more rare among athletes in major sports. He has spent the last three seasons as a full-time starter and started 184 of the 213 games he played.

When it comes to Ole Miss’ baseball program, Bortles’ face is as recognizable as his name.

“Just a great representative of Ole Miss,” Ole Miss coach Mike Bianco said. “You watch him with the fans, he’s just a great guy, a great leader, a great personality and certainly a great player.”

The brother of Jacksonville Jaguars quarterback Blake Bortles, the younger Bortles has experienced everything college baseball has to offer during his time in Oxford. He played in the Rebels’ last postseason win as the only player left from Ole Miss’ 2014 College World Series team and was a part of two other regional teams.

The latest experience isn’t one Bortles is enjoying nearly as much with finality coming much sooner than expected since Ole Miss failed to make the NCAA Tournament this year, but Bortles recently reflected on the totality of the last four years, which included a return trip to Omaha last summer to compete in the College Home Run Derby.

“It’s been awesome,” Bortles said. “Thanks to Coach Bianco, (assistant) coach (Mike) Clem(ent), (assistant) coach (Carl) Laff(erty) and everybody that’s helped me throughout the process. It’s been great. I have a lot of friends that I consider my family now, so it was awesome. Awesome experience, and I wouldn’t change it for the world.”

Bortles hit .269 this season and posted a career-high .482 slugging percentage with a career-best 10 home runs, nine doubles and 42 RBIs while manning the cleanup spot. He also cut his errors to single digits after committing 12 a season ago, but it’s the guidance the veteran provided to a team that played 12 freshmen and 14 newcomers that Bianco appreciated just as much.

“There’s so many young guys and so many guys going through adversity for the first time,” Bianco said. “I think I’ll always remember his leadership and his presence on the field, in the dugout and in the locker room and how he’s always carried himself in such a great way.

“I think he’ll always be one of my favorites and I think one of the fans’ favorite.”

Bortles just wishes it had ended differently for himself and the teammates he’s leaving behind.

“That’s not what I wanted to leave for my last year,” Bortles said of missing a regional. “But I think everybody on our team would tell you they wouldn’t change this season for the world. They learned and gained a lot of knowledge, worked hard and got better, so I think next year they’re going to have that much more confidence going into it and have a special year next year.”

As for what’s next for Bortles, he said he’ll return to his native Florida and continue working out ahead of this year’s MLB First-Year Player Draft, which begins June 12. Bortles didn’t have the option of leaving Ole Miss early after going undrafted last year, but he said he’s willing to work out for any team that’s interested in hopes of hearing his name called this time around.

“Hopefully someone drafts me, and I’m going to play baseball for as long as I can,” Bortles said.