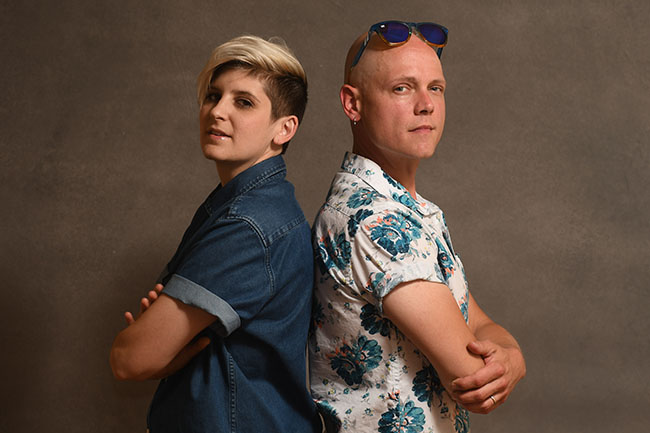 And the Echo, duo Morgan Pennington and Winn McElroy, will take the Grove stage on Sunday for the Summer Concert Series. (Photo/Bruce Newman)

As summer begins to unfold and we enter the month of June, a beloved community tradition is slated to make its return on Sunday evening.

This year’s edition of the Summer Sunset Concert Series kicks off at 5 p.m. in the Grove this Sunday with a performance by La Fusion, offering a blend of Latin and jazz.

The Summer Sunset Series features a free concert in the Grove every Sunday for the month of June. The concerts are open to the public and will feature local and regional acts spanning several different genres. In an effort to accommodate families, the start time for this year’s concerts has been moved up an hour to 5 p.m.

For the second straight year, the Yoknapatawpha Arts Council will be hosting their annual membership picnic in conjunction with the first concert. Wayne Andrews, executive director of the Arts Council, said that Polk’s Meats will once again provide food for the picnic, and that in addition to the usual festivities, Andi Bedsworth and Art to Go will provide arts and crafts activities for children in attendance.

“(The Summer Sunset Series) is one of the most popular events in Oxford because it’s so casual,” Andrews said. “Bring your kids, bring your blanket, bring your cooler with your snacks and lemonade. It’s such a community oriented event.”

Andrews did wish to convey that, although setting up tents is certainly more than welcome, particularly in efforts to accommodate a large group, tents should be kept toward the back of the crowd out of respect for the other attendees.

Andrews also celebrated the diversity of this year’s music lineup, which accurately reflects the rich cultural footprint of Oxford and the surrounding region. Andrews said that the Arts Council is “always trying to provide something new” with the concert series.

“We have a great Latin community, and to be able to put out a show that’s top-notch, with a house band backing up these musicians is fun,” Andrews said of La Fusion. “It’s something everybody can enjoy. It’s danceable music.”

In keeping with the promise of diversity, the second installment of the Summer Sunset Series will shift toward a completely different area of the musical spectrum, as local synth-pop favorites And the Echo are set to take the stage on June 11.

Andrews recognized the importance of providing a platform for a group like And the Echo, which features mainstays of the local music scene Morgan Pennington and Winn McElroy.

“Having Morgan and Winn involved and engaged shows that Oxford is a town that has a very vibrant music scene,” Andrews said.

Capping off this year’s Summer Sunset Series on June 25 is Blackwater Trio, an acoustic group from the Delta.

Andrews pointed out the group efforts that keep this series a thriving community experience. Participating sponsors this year include the Arts Council, the University of Mississippi Museum, the Oxford-Lafayette Chamber of Commerce, Visit Oxford, and the Ole Miss Student Union.

Andrews also encouraged interested parties to follow the Arts Council on social media sites such as Facebook and Twitter, particularly in order to stay updated on the status of the events in the case of inclement weather. Andrews said that if the weather does not look serious, they may simply delay the start time, but if inclement weather is likely, concerts will simply be canceled.