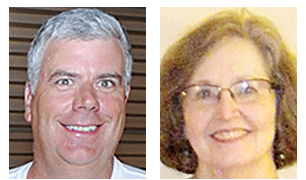 After Mayor-Elect Robyn Tannehill announced she would not be seeking re-election as the Ward 2 aldermen, and instead qualified to run for mayor, two Oxford residents decided they wanted to fill the seat she was leaving open.

On Tuesday, Republican Mark Huelse will face off against Democrat Paula Shanks.

Polls will be open from 7 a.m. to 7 p.m. and all Ward 2 residents will cast their vote at the Oxford Conference Center.

Huelse, who has lived in Oxford for the past 26 years, has served on a number of committees, including the City Ordinance Review Committee and the Oxford Planning Commission. He currently sits as chairman of the Oxford Square Alliance and is president of the Grand Oaks Homeowners Association. He is a member of the Oxford University United Methodist Church Building Committee. He is the co-owner of Something Southern.

He says the city’s biggest job right now is working on the implementation of ordinances along with infrastructure improvements that support the Vision 2037 plan, and he’s ready to “hit the ground running,” to help if elected alderman.

However, when it comes to Ward 2, he says maintaining the integrity of existing neighborhoods is the biggest concern of many of its residents.

Lately, a hot topic in Oxford has been affordable and workforce housing and current and new aldermen will be faced with trying to come up with creative solutions in the months to come.

Huelse said it’s something that should be addressed collectively by the local government, nonprofits and private investors.

“Student housing is about at saturation levels, as supply outpaces demand, rental rates should level out, especially in traditional single-family neighborhoods,” he said. “Vision 2037 calls for 400 units in the next few years, some of these could already be available in current vacant housing.  These could be converted to HUD Certified housing, it seems feasible the landlord would rather have a long term rental family that would take pride in the property versus students moving in and out every year with little respect for the property.”

Huelse and his wife Becki have been married for 26 years. He has a Bachelor of Science in mechanical engineering from the University of Missouri-Rolla, and a master’s degree in business administration from Christian Brothers University in Memphis.

“I have the talent to work on long term vision planning for the future, but can also live in the moment,” he said. “I am a hard worker and like to see things get accomplished. My experience in the corporate world, coupled with years of running a small local business, and problem-solving training give me a unique skill set.”

Paula Shanks grew up in Oxford, attending Oxford public schools and earning a degree in public administration from the University of Mississippi. She worked in the Federal Probation Service and has three adult children.

She’s served with Leadership Lafayette and on the original Retiree Attraction Committee under the leadership of Max Hipp, the former Oxford and Lafayette County Chamber of Commerce executive director. She has served on both the LOU Vision Committee and the Vision 2020 Committee, appointed by the late Mayor Pat Lamar. She also served on the Oxford Planning Commission under Mayor Richard Howorth.

She says Oxford’s explosive growth and development is the biggest issue Oxford leaders are currently facing.

“Fortunately our current leadership has taken steps to responsibly deal with the challenges posed by rapid growth in initiating Vision 2037, involving the community in creating that vision, and hiring very capable people to implement this 20-year plan,” she said. “My experience with the U.S. Probation Service when our organization tripled in size and my experience traveling the country for the Federal Judicial Center facilitating workshops in ‘Effectively Managing Change’ provide me a unique perspective and skills in addressing the challenges ahead.”

On affordable housing, Shanks said Oxford’s growth and successes in becoming a tourist destination, a retirement community and place of higher learning, have helped increase the price of living in Oxford.

“While these neighborhoods once provided affordable housing, now many of the houses have been beautifully improved and sit empty as vacation or weekend homes or are rented to students by the bedroom,” she said. “The service industry which provides employees to our fine restaurants and hotels has now become our second largest employer, something we did not foresee with Vision 2020. These low-paying jobs and the high cost of land in Oxford have created an affordable housing crisis. I would like to explore the options and learn about creative, successful solutions in other fast-growing areas of the country.”

Shanks, whose family has lived in Oxford for six generations, says she is passionate about her hometown and concerned about its future.

“I want to be part of the team which makes decisions to protect, preserve and promote Oxford,” she said. “I am now retired and have the time to give to my community.”