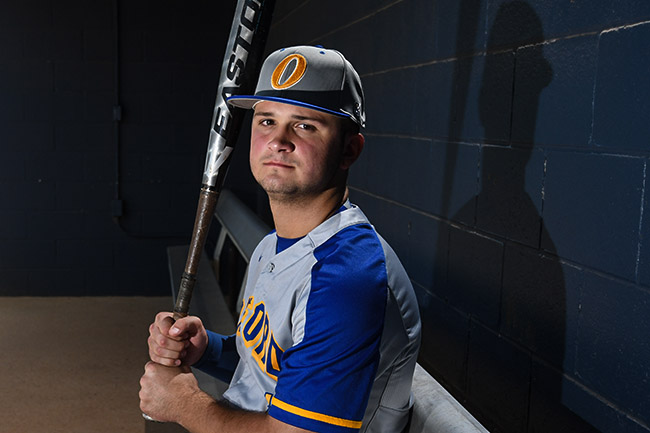 Drew Bianco worked on his approach at the plate and improved his production dramatically from his sophomore year to his junior year this season. (Bruce Newman)

Patience at the plate, something baseball players have been preached to do since the beginning of the sport. Some players take the advice of their coach and slow down, others decide to stick to their own approach. For Oxford’s Drew Bianco, he chose patience over power and it earned him the 2017 EAGLE Player of the Year.

During the Chargers’ march to a second-straight state championship there was enough offensive production to go around with Thomas Dillard crushing 16 home runs and 49 RBIs and pitcher Jason Barber adding 37 RBIs of his own. This year, those to players were not on the Oxford roster, taking the production with them and Bianco knew he’d have to contribute, which meant changing up his thought process with a bat in his hand.

“From a power standpoint I knew I was having the same kind of year (as 2016), Bianco said. “I think I did a lot better job of getting my average up and putting the ball in play and making good things happen for the team. Last year, it was one of those things where I knew I had the power, so I guess I was just kind of going for it more. This year I tried to just put good swings on the ball and trust my power to get it out.”

Another aspect of Bianco’s game that improved was the amount of strikeouts. In 2016, Bianco was tied with Duncan Graeber and Preston Perkins as the strikeout kings of Oxford with 25 each. This season that number dropped dramatically with Bianco striking out only 12 times in 97 at bats. Bianco worked with Oxford assistant coach David Webb as well as his father, and Ole Miss baseball head coach, Mike.

“You put the ball in play in high school a lot of good things happen,” Bianco said.

Family affair
A lot has been written about the Bianco baseball family, but it is another thing entirely to experience playing with your siblings, let alone three of them in one season. That is what happened this year as 3/4 of the Oxford infield had the last name of Bianco. Drew manned shortsthop while brothers Ben and Sam patrolled first and second base, respectively. It will be the only time that will occur as Ben graduated and will be playing for the Louisville Cardinals in the fall. Sam, a rising sophomore, earned his way into the starting lineup and the leadoff spot in the batting order in his freshman year to make the trio complete this season.

“It’s pretty cool when you look on Twitter and all that stuff and it says ‘Bianco flips to Bianco who throws to Bianco for a double play,’ I don’t think that I’ve ever seen that before,” Bianco said. “I love Ben and I love Sam and just having them out there is really fun.”

Bianco, who committed to LSU last year, will not spend his final summer as a high school baseball player with the Chargers, but instead will play with the Louisiana Knights travel team in Perfect Game tournaments as well as Team Mississippi with Clark Stovall in a tournament in Oklahoma later this week.

Graeber was injured early in the season during a Spring Break tournament game against Water Valley when a pitch hit him, sidelining him until the final week of the regular season. The senior contributed in a big way during the playoff run when he returned and hit .389 at the plate for 16 RBIs, three doubles and three home runs in 21 games played.

Parker Stinnett was one of Oxford’s top two pitchers, along with brother Carson. On the mound, Stinnett had an earned run average of 0.99 and a perfect record of 7-0 in 10 appearances. He recorded a team-high 64 strikeouts, walked 16 batters and did not give up a home run. Stinnett helped himself out at the plate occasionally, recording 11 RBIs and hitting two home runs.

Ben Bianco was moved from behind home plate when it was clear the should injury he sustained last season was going to prevent him from catching every day and sophomore Clay Ivy took his place. Bianco ended up as the everyday first baseman, recording a fielding percentage of .969 and only six errors. Offensively, Bianco had a batting average of .333 to go with a team-leading 43 RBIs and eight home runs.

One of the biggest additions to Oxford’s roster was right fielder Clark Stovall, who moved from Jackson to Oxford last year. At the plate, Stovall hit .371 for 36 RBIs and one home run. In the outfield he had a fielding percentage of .950 as well as two double plays and two assists.

Roberts hit .366 and led the team with 15 RBIs and had two doubles and a triple as the everyday shortstop. Woods was right behind Roberts in the hitting departing with a .333 average and had nine RBIs and one home run.

Colin Crawford and Luke Gossett were both double-duty guys for Lafayette, playing in the field as well as taking the pitcher’s mound. Of the regular rotation of pitchers, Gossett had a staff-best 2.73 ERA and led the team with 30 strikeouts. Crawford had a 3.96 ERA and followed Gossett with 27 strikeouts. At the plate, Gossett hit .260 for 10 RBIs and four doubles. Crawford hit .241 and had 14 RBIs to go with three doubles.