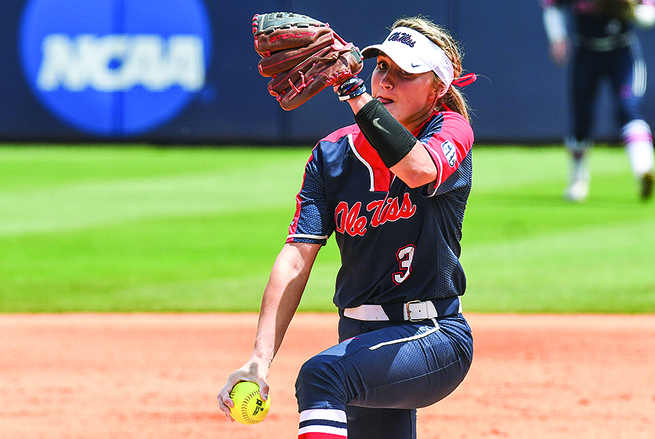 Ole Miss pitcher Kaitlin Lee will continue to be the Rebels’ ace inside the circle when she returns for her senior season next year. (Bruce Newman)

There’s only one thing left for Ole Miss’ softball program to do.

“You win the super regional and get to Oklahoma City (for the Women’s College World Series),” Ole Miss coach Mike Smith said. “That’s how you build upon it.”

Things have changed for the Rebels following the most successful season in program history. It ended out west with a pair of losses to UCLA last week but not before Ole Miss set a single-season record with 43 wins, won its first-ever Southeastern Conference Tournament title, hosted its first-ever regional and advanced to the first super regional in school history.

The Cinderella run is the latest evidence of the Rebels’ renaissance under Smith, who led Ole Miss to its first-ever NCAA Tournament appearance the year before in just his second season at the helm. As Smith reflected on how far the Rebels have come since he inherited the team with the SEC’s worst record three years ago, he realizes the biggest difference is what’s expected of a program that’s long been viewed as the underdog.

“We went from Year 1 where nobody was expecting Ole Miss softball to do anything to now people are expecting us to get to a super regional every year and potentially get to Oklahoma City,” said Smith, who’s already won 114 games at Ole Miss. “Now the expectations are higher.”

That doesn’t mean the Rebels try to do anything different, Smith said. In fact, it’s quite the opposite.

Ole Miss was the lowest seed to ever win the SEC Tournament, rebounding from an 0-6 start in league play to finish eighth in the regular-season standings. That leaves plenty of work to do as the Rebels try to climb the totem pole in one of the nation’s premier softball conferences, but Ole Miss had some breakthrough moments with a sweep of WCWS participant LSU and a series win over nationally-ranked Alabama during the regular season while beating the Tigers, Tide, Auburn (super regional team) and No. 1 Florida (WCWS team) in the SEC Tournament.

They’re the kind of high-profile wins that produced respectability the Rebels are out to keep.

“We still have to go out and play softball,” Smith said. “We have to play good softball. We have to beat the teams we’re supposed to beat, and we have to beat some of the teams that people aren’t expecting us to beat. I think we handle it the same.

“People would talk about the big teams in the SEC, and I feel like we’re one of those teams that should be talked about with the rest of the SEC and the top programs.”

Ole Miss is losing just two full-time starters in outfielder Miranda Strother and catcher Courtney Syrett. Smith said he’ll look at possibly making a late addition to the incoming recruiting class to fill the void behind the plate, but his primary objective heading into the offseason is to build more depth in the circle behind Kaitlin Lee, who burst onto the national scene after throwing every pitch in all but one of Ole Miss’ nine postseason games.

“Kaitlin Lee shouldn’t have had to throw as much as she did, but we were just getting inconsistency from the rest of the bullpen,” Smith said. “Brittany Finney finishing the way she did (in the season-ending, 1-0 loss to UCLA) I think was a huge staple for us heading into the future, but we need more consistency from our pitching staff.”

Smith also hit on the need for more production from the middle of the order as the Rebels try to work toward taking that last, coveted step.

“Winning a super regional and getting to a College World Series is now a goal that we feel like is within our reach,” Smith said. “I think we talked about it and people said, ‘Yeah OK, right, Coach,’ but now it’s in our reach. We’ve proven to ourselves that we can play with anybody in the country.”