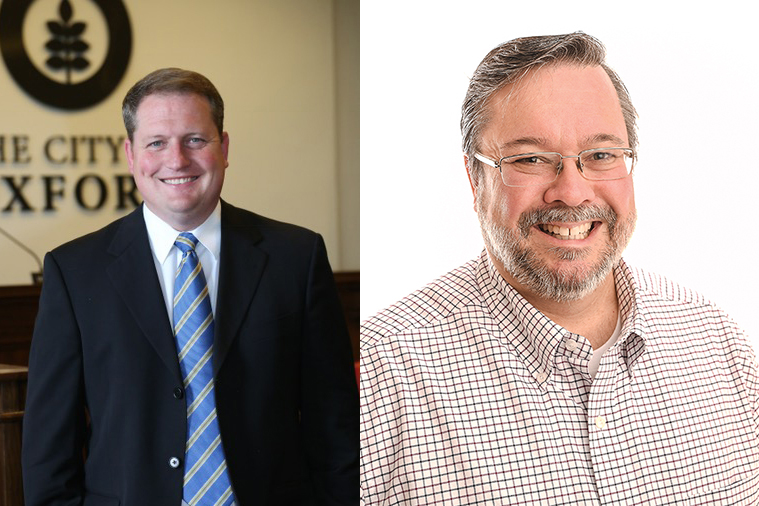 Jason Bailey (left) and Wayne Andrews are competing for the Ward 6 seat in Oxford.

Incumbent Jason Bailey will go up against Democrat Wayne Andrews on Tuesday to try to retain his seat on the Oxford Board of Aldermen as the Ward 6 alderman.

Bailey has been the alderman for Ward 6 for five years. He won a special election in 2012 after then-alderman Brad Mayo was elected to the Mississippi House of Representatives.

He sees Oxford’s growth being a challenge aldermen will be facing sooner rather than later.

“I believe we’ve taken the necessary steps so far with Vision 2037 and we’re about to adopt an updated zoning map.”

Bailey says funding becomes the challenge when planning for the infrastructure to support the growth.

“We have to get creative on ways to get the funding without raising taxes,” he said. “Whether it’s from the state of federal level, we will be seeking those avenues along with others. We will be adopting — sometime in the next year — a transportation and infrastructure plan.”

“The commission could figure out some the hurdles we have to get over,” he said. “One thing we’re looking at is annexing undeveloped land. We’re going to have to work with developers and Realtors. Get everybody and anybody into a room to figure out cost efficient ways.”

Bailey, the owner of Summit Property Management, said his years of business experience and being on the board already for five years makes him the best candidate.

For Ward 6 residents, he said he will continue to find funding to complete Phase 2 of the Woodlawn Davis Nature Center that would include a pavilion.

Bailey is married to Greta and they have two children.

Walking the neighborhoods in Ward 6, Wayne Andrews said he has heard the same core concerns from residents: housing, traffic, under-employment and growth.

“These issues are connected requiring an approach that works at several levels,” he said. “We need to include the county and university as these are issues that impact us universally. Oxford is a small community, with a small tax base, that is serving a much larger group. To sustain the level of services to which we have become accustomed we need to think how jointly we can tackle problems. When we work together, such as with the bus system, the costs are affordable and provide creative solutions.”

Andrews, who is married to Mary Margaret, says the city needs to find opportunities that encourage entrepreneurial growth that will inspire young professionals to stay in Oxford.

“The university’s strong programs in entrepreneurship and Center for Manufacturing Excellence should provide opportunities for our Economic Development Foundation to offer resources that inspire those students to create businesses,” he said. “These students have our shared values and love of Oxford. Creating new businesses will create the economic ladder that will help make housing affordable.”

Using the term “affordable housing,” is a poor choice of words, according to Andrews, because he believes it conjures up housing for just one need in the community.

“We need housing that builds a sense of community and neighborhood,” he said. “The cost of housing in Oxford is not affordable for most people including our police officers, teachers, and university employees.”

“The cost of housing is based on the market,” he said. “Oxford has different groups vying for housing each with different needs and resources. We need to plan growth to create communities and neighborhoods. This should include tiers with prices that allow all segments of the community access to housing which would build opportunities.”

Andrews is the executive director of the Yoknapatawpha Arts Council and says his experience there makes him the right choice to be alderman for Ward 6.

“Our board, staff and I have regular sessions in which we listen to artists, residents and business owners about needs, resources, and opportunities that would impact the quality of life and support creative businesses,” he said. “I then put together partnerships to help reach these goals. The results have been the Arts Incubator and Big Bad Business Series which created a partnership with the Chamber to provides resources, mentoring, and workshops that encouraged creative businesses in the community.”

Voting will take place 7 a.m. to 7 p.m. Tuesday at the Oxford Conference Center for both wards.